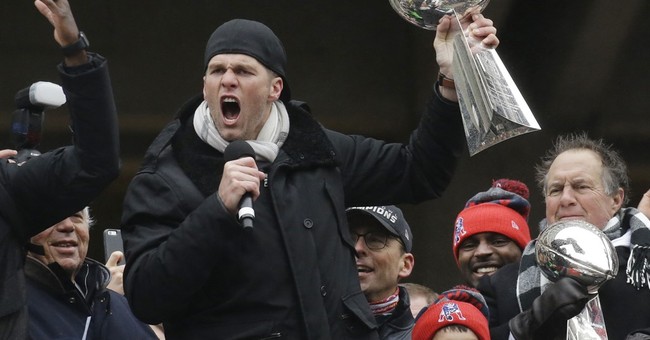 New England Patriots QB Tom Brady will not be attending Wednesday's celebratory White House visit, he announced this morning in a statement. Brady cited "personal family matters" as for why he would be skipping the event, and said that he was very appreciative of President Trump's support of the team. He also said that he hoped that the Patriots would be back on the South Lawn in the near future.

"I am so happy and excited that our team is being honored at the White House today. Our team has accomplished something very special that we are all proud of and will be for years to come. Thank you to the President for hosting this honorary celebration and for supporting our team for as long as I can remember. In light of some recent developments, I am unable to attend today's ceremony, as I am attending to some personal family matters. Hopefully, if we accomplish the goal of winning a championship in the future years, we will back on the South Lawn again soon. Have a great day!"

Brady and Trump have been friends for quite a while, and Brady was spotted with a "Make America Great Again" hat in his locker early on in the season.

According to a Boston Herald reporter, Brady will be spending the day with his mother, Galynn. Brady's mother has been battling cancer for the past year and a half and was only barely cleared by doctors to attend the Super Bowl.

Still, this hasn't stopped people from taking cheap shots at both the team and at Brady over politics:

imagine being the white house staffer who gets to tell trump tom brady's not coming.

If you haven't had enough Patriots jaw-droppers for one day, Tom Brady will not visit White House w/team today. Says it's a "family matter"

But ya know what's not speculation? Trump - the star f**ker of all star f**kers will be devastated by this news. Brady was his last A-lister

Standby for "Where's Tom Brady. I love Tom Brady. He spoke at the convention. In fact he nominated me. Tom! Where's My QB...Huh? What?" https://t.co/EYb8G3RLFT

The SS Tom Brady isn't sailing toward WH after all. Even he has better things to do than hang out with an FBI treason suspect.#morningjoe