After Sunday's Long Lines and Confusion, Maine May Abandon Caucuses 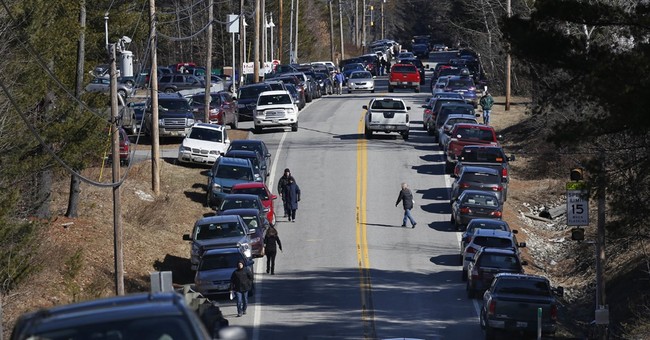 Maine held its caucuses on Saturday and Sunday, and it didn't go off perfectly in many places. Turnout for both parties broke records and there were reports of confused voters, long lines, and dangerously crowded venues. Now, as a result of this, Maine may transition away from a caucus system and to a primary. State Senate Minority Leader Justin Alfond (D-Portland) said that he intends to submit a bill to return to the primary system. Maine's last primaries were held in 2000 and saw much higher turnout than any of the caucuses.

“Today, we saw an unprecedented turnout of voters in Portland who are passionate, energetic and fired up to participate in our democratic process,” said Sen. Alfond. “Maine’s voter turnout has always been a point of pride, and while local party officials were prepared for big crowds at the local caucus, the awe-inspiring turnout meant too many had to wait in long lines to make their voices heard. We need to have a conversation, once again, about the best way to nominate our presidential candidates, and ensure the process is easy and accessible to all.”

And while this is likely a positive thing for the state as caucuses have seen their fair share of problems throughout the years, it is rather interesting to note that when Republicans proposed returning to the primaries in 2012 (after controversy regarding how many votes Ron Paul received), Democrats dismissed these concerns and nothing was changed.