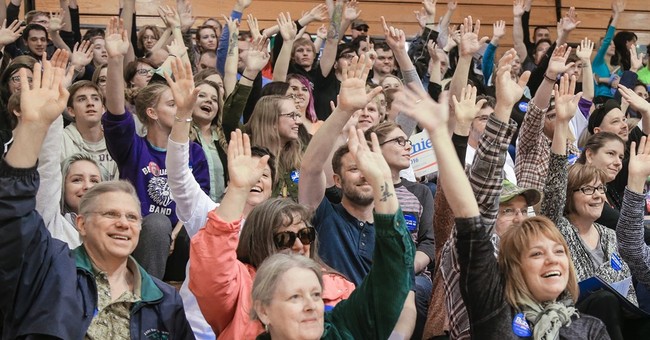 Maine Democrats head to the caucus today, and turnout is so high in some areas that the actual "caucus" part of the caucus has been canceled and voters will simply turn in a paper ballot to avoid overcrowding venues. According to the Maine Democratic Party, this is to ensure that everyone is able to actually vote and is consistent with party rules.

I've been waiting for three hours to vote in Portland. This is the line behind me. #MECaucus pic.twitter.com/IyLbrjYjYK

I have never seen a line this long. This turnout is beyond record-setting. #MECaucus #maine #FeelTheBern pic.twitter.com/aVKcRWHau3

This is the start of the caucus line in Portland. The end of it is 3 blocks away. #maine #MECaucus @cnnbrk @maddow pic.twitter.com/RcHTruuDx4

Maine is widely expected to be an easy win for Bernie Sanders. Republicans in Maine, who caucused yesterday, also turned out in record numbers. Ted Cruz won a surprise victory over Donald Trump.

UPDATE: Maine might be going back to primaries after this.

JUST IN: @JustinAlfond plans to introduce bill as soon as possible to bring state's party vote process back to primaries, @NECN reports.