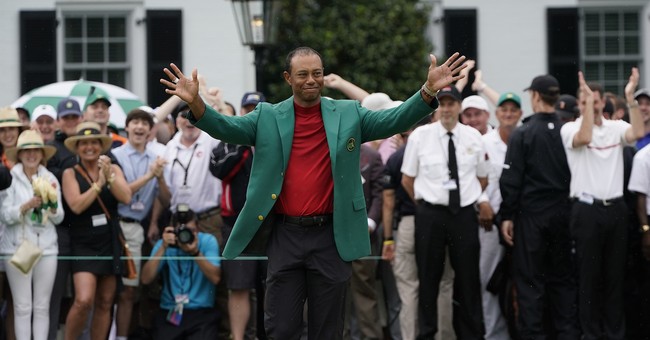 Tiger Woods showed up to the PGA Championship on Thursday wearing a thin blue line mask. The thin blue line represents police officers tasked with protecting society from decaying into chaos. Anyone who doesn't believe cops are the ones protecting the streets against chaos hasn't been paying much attention to the daily news out of places like Portland, Seattle, and just about every Democratic-led major city from sea to shining sea.

To shore up the black vote for the Democrats, which is harder than normal this year because Biden keeps saying racist things, Democrats and their media cronies are telling blacks that America is a very racist country that will only become less racist if blacks vote for Democrats in November. Every election, this is their go-to strategy; the fact that the strategy also works with gullible white liberals is an added bonus. This is why Americans are introduced to vague, word-salad conspiracy theories such as "white fragility," "systemic racism," and "white privilege" every time an important election rolls around.

But contrary to what Joe Biden believes, black people can think for themselves and many are seeing the left's election-year race-baiting for what it is. Count Tiger Woods among them.

In 2019, Woods won his first Masters tournament in 14 years, an amazing comeback story for a legendary athlete whose career derailed following revelations of serial infidelity culminating in a high-profile divorce.

Following his incredible achievement in 2019, President Trump honored Woods with the Presidential Medal of Freedom. Trump bestowing honors upon a black athlete only made it harder for the left to slander Trump as a racist, so they directed their ire toward Tiger Woods and his decades-long friendship with the president. It was a bad argument for the media to make since many in the media had also maintained friendships with Donald Trump, some going back more than 30 years. But, then again, the media has never been really good at making arguments.