Derek Hunter
|
Posted: May 09, 2019 12:01 AM
Share   Tweet
The opinions expressed by columnists are their own and do not necessarily represent the views of Townhall.com. 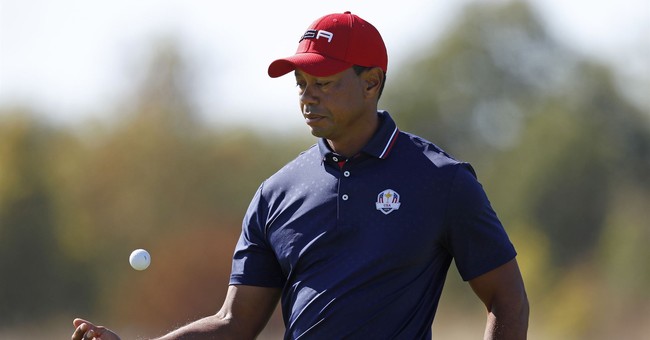 When Tiger Woods won The Masters this year it shocked the world. His glory days were long since gone; injuries had relegated him to forever live in past accomplishments – his career was pretty much over, he just hadn’t retired yet. Then he did it, he came back and won. Nearly everyone was not only shocked, they were excited. Americans love a great comeback story.

In the midst of that celebration, something happened to turn a lot of people away from that happiness – the president of the United States joined in.

First came a tweet congratulating Woods. Leftists responded the way they respond to everything, they called Donald Trump a racist. Ask them what time it is and you’ll get the same response.

That would’ve been the end of it if that were the end of Trump’s involvement in the story, but it wasn’t. The president announced he would present Tiger Woods with the Presidential Medal of Freedom for being such an inspiration, the very thing everyone was celebrating only days earlier.

When it became known that Woods would accept the highest honor our country can bestow on a civilian, liberals were outraged. “How could a black man accept an award, any award, from Donald Trump?” they demanded, as if Woods owed them an explanation.

Woods doesn’t, of course, and he’s had a decades-long friendship with the president, having golfed with him many times. “Didn’t he realize Trump is a racist?” media-types asked, ignoring their own history of being friends with Trump for longer than Woods. Those friendships, lasting in some cases more than 30 years, came to an end when Trump announced he was a Republican. Apparently, the people screaming loudest that the president is a racist didn’t notice it when they were hanging out. Either that or they’re lying, but they wouldn’t do that, would they? (They would, and are.)

In a sea of liberal outrage, one of the worst responses came from the Baltimore Sun’s editorial board. They wrote, “we wish Mr. Woods would have taken a stand against hatred and declined the award given the racial and ethnic rift Mr. Trump has widened and exploited in the country since taking office.” The examples they cite are…none. They just hate Trump and, in typical liberal debate style, call anyone they disagree with a racist.

The Sun does admit: “Just because he is famous doesn’t mean Mr. Woods has any obligation to be a spokesman against racism in America. He did indeed train all his life to play golf, not lead a modern day Civil Rights movement.” Awfully nice of them to acknowledge, isn’t it? It wouldn’t last longer than that sentence.

The next two lines read, “But his position as a star athlete, particularly as an African-American in a sport that has historically been overwhelmingly white, makes him a role model in this regard whether he likes it or not. He could use this opportunity to raise awareness of an issue that has surely impacted his life, as well as those of many of his relatives and ancestors.”

Suddenly, Tiger Woods became responsible for everyone in his bloodline, ever. “Is Mr. Woods oblivious, or does he just not care that the president regularly demonizes minorities and emboldens those who hate?” the enlightened Sun wondered, still citing no examples.

In typical liberal fashion, where they know and demand how everyone else should act and think based on the color of their skin, the Sun took to attacking Tiger personally under one of the left’s favorite covers – “some people.”

“Some African Americans have long taken him to task for saying he gets offended when called African American, instead referring to himself as “cablinasian,” a term he coined to reflect his mixed Caucasian, black, American Indian and Asian heritage,” they wrote.

To the left, a man can declare themselves to be a woman and it immediately becomes a fact everyone must adhere to, even changing pronoun use to whatever that person wants (including made up words) or they’re a monster. But a man refuses to play by liberal imposed race-labels and he’s somehow the problem.

Liberals, as exemplified by the Baltimore Sun, insist everyone, especially minorities, “bend the knee” to their agenda. They know what is best for everyone, particularly people of color (a meaningless term that if you simply received a penny every time it was uttered, could retire the national debt with just one week of the Democratic primary campaign).

If you play the liberal game, you are praised as a hero. The Sun cited “acceptable” athletes like Colin Kaepernick and LeBron James, both of whom have a history of spewing real racism, as models Woods should have followed. Really, however, they’re just saying Tiger should do what they want; hold the politics leftists deem acceptable for a person with his melanin level. They know how he should act and what he should think based on his skin color. There used to be a word for that…