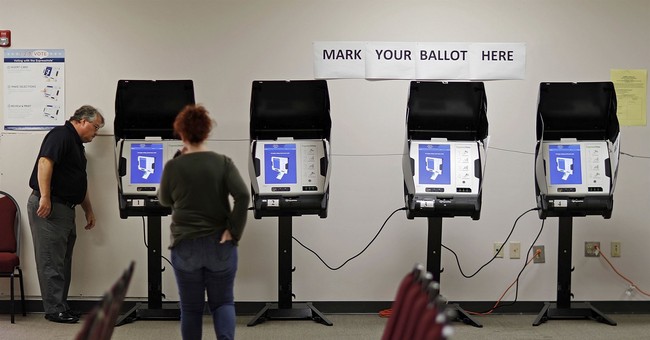 Judge Kevin Elsenheimer of the 13th Circuit Court on Monday ordered a "forensic imaging" of the Dominion Voting Systems machines and software used in Antrim County, Michigan, where 6,000 votes for President Trump were incorrectly attributed to former Vice President Joe Biden. The Michigan Secretary of State stated the error took place because of "human error" not a software "glitch."

The order was made after Antrim County resident William Bailey filed a lawsuit challenging the integrity of the election results. Specifically, he brought up concerns about how county election officials originally reported their unofficial results. The focus of the election results weren't on the outcome of the presidential contest but rather on a local proposal to allow a marijuana dispensary in town, the Detroit Free Press reported.

Earlier this month Allied Security Operations Group (ASOG) in Dallas inspected the election equipment. Originally the report wasn't going to be made public without receiving approval from the judge first. Elsenheimer came back and said a report can be released as long as the software's coding are redacted. In the newly-released report, ASOG stated Dominion's software has a 68 percent chance of errors.

"The allowable election error rate established by the Federal Election Commission guidelines is of 1 in 250,000 ballots (.0008%). We observed an error rate of 68.05%. This demonstrated a significant and fatal error in security and election integrity," the report states. "The results of the Antrim County 2020 election are not certifiable. This is a result of machine and/or software error, not human error."

"It is critical to understand that the Dominion system classifies ballots into two categories, 1) normal ballots and 2) adjudicated ballots. Ballots sent to adjudication can be altered by administrators, and adjudication files can be moved between different Results Tally and Reporting (RTR) terminals with no audit trail of which administrator actually adjudicates (i.e. votes) the ballot batch," the report states. "This demonstrated a significant and fatal error in security and election integrity because it provides no meaningful observation of the adjudication process or audit trail of which administrator actually adjudicated the ballots."

"A staggering number of votes required adjudication. This was a 2020 issue not seen in previous election cycles still stored on the server. This is caused by intentional errors in the system. The intentional errors lead to bulk adjudication of ballots with no oversight, no transparency or audit trail," the report states. "Our examination of the server logs indicates that this high error rate was incongruent with patterns from previous years. The statement attributing these issues to human error is not consistent with the forensic evaluation, which points more correctly to systemic machine and/or software errors. The systemic errors are intentionally designed to create errors in order to push a high volume of ballots to bulk adjudication."

"We found that the Dominion Voting Systems is designed intentionally to create inherent and systemic voting errors. What I mean by that is when you run a ballot through the machine, even if it's a blank ballot, it will have a 68 percent chance of creating an error," DePerno told reporter John Solomon. "When you create an error, this machine does not reject the ballot. What it does instead is send it to a folder and that folder will then accumulate the ballots until the time that someone decides that they need those ballots. And then those ballots will be bulk adjudicated by someone. Could be offsite, could be onsite somewhere sitting at a computer. And, without any oversight, they can click one button, lope the entire batch of ballots to one candidate and then send them back to the tabulator."

According to DePerno, the machine's software has the ability to be programed to automatically bulk adjudicate ballots.

"We believe that what we found, and when you apply those findings to what we saw on Election Night, such as in Detroit, where ballot counting was shutdown at 2 o'clock and then we came back at 4 o'clock and there was large spikes of votes going to Joe Biden, we believe that, in part at least, that that happened because they decided to bulk adjudicate some ballots they had been saving up throughout the night," DePerno said.

Dominion Voting Systems has repeatedly denied there are issues with their voting machines or that their software could be used to swap votes from one candidate to another.

In fact, the company's CEO, John Poulos, published an opinion piece in the Wall Street Journal on Nov. 30. In it, he defended his company, saying the voting machines "accurately tabulate votes."

There is no secret “vote flipping” algorithm. Third-party test labs, chosen by the bipartisan Election Assistance Commission and accredited by a program of the National Institute of Standards and Technology, perform complete source-code reviews on every federally certified tabulation system. States replicate this process for their own certifications. Postelection canvassing and auditing also exist to provide additional assurance of the vote totals’ accuracy.

The part of the election process on which Dominion focuses is highly regulated and certified. The company doesn’t work in noncertified areas such as voter-registration systems, poll books or signature-verification software, and it doesn’t provide vote-by-mail printing. Dominion voting machines do one thing: accurately tabulate votes from county-verified voters using a durable paper ballot controlled and secured by local elections officials.

During testimony in front of the Michigan Senate Oversight Committee on Tuesday, Poulos stated the goal of his company isn't to run elections but to provide machines to election officials so they can carry out their duty.

Poulos and other Dominion surrogates have defended their systems, saying votes made on the machines can be cross compared to paper ballots.

"People can speculate about votes being 'switched,' or 'secret algorithms' or 'glitches,' but if any of that were true, the paper ballots wouldn't match machine count," he explained.