Would North Korea Rather Have a McDonald's or a US Embassy? Well, It's Hard to Say 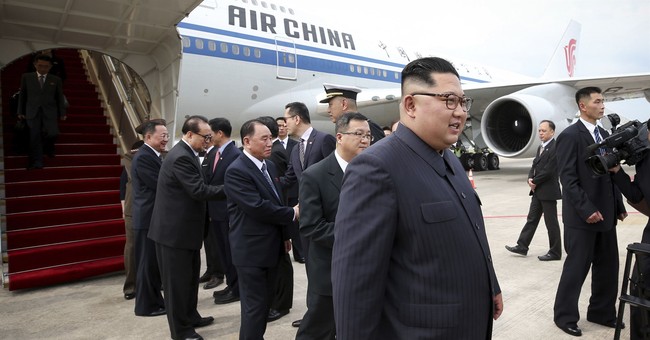 Axios' Jonathan Swan has another great scoop ahead of President Trump's historic peace negotiations with North Korea's Kim Jong-un this week. Apparently, the United States could possibly construct an embassy in the communist country in exchange for denuclearization of the Korean peninsula. This report comes weeks after sources said that the potbellied Dictator is also interested in bringing a McDonald's to the famished nation as a sign of willingness to work with the west.

As noted by Swan's sources, President Trump's end goal is ultimately getting  North Korea to give up its stash of nuclear weapons.  If that includes establishing an official U.S. Embassy in the country, then President Trump could agree to that. His negotiating tactic is to be open to most possibilities that could reasonably get the two countries to a mutual agreement (Via Axios):

"One of the sources, who is familiar with the president’s thinking, said Trump had made it a point not to reject any ideas headed into the summit:

The source close to the White House added: "POTUS will consider any idea anyone brings him if it delivers on denuclearization that is irreversible and verifiable. He won't be played by Kim. But it is not his style to — on the front end — rule out possibilities of what could happen or may happen depending on how negotiations go."

But, besides political reform, the communist country has also signified economic reform by a potential establishment of a fast food chain. (Via Washington Post)

"North Korean leader Kim Jong Un may allow a "Western hamburger franchise" into the country as a show of goodwill to the United States, according to an intelligence report described by U.S. officials to NBC. That follows remarks by South Korean adviser Chung-in Moon in late April, who said that North Korea might be interested in welcoming a McDonald's as tensions ease.

Compared to the threat of nuclear war, of course, a Pyongyang McDonald's seems like small fries. But experts and history suggest there's more at play here than one token franchise.

McDonald's has long been seen as a symbol of Western culture and capitalism - particularly in communist countries. And it's expansion into China and Russia was seen as a landmark in the 1990s.

This might seem silly, but allowing a private sector businesses such as McDonald's can actually have extraordinary impact between the west and communist countries.

"This has happened with a number of different communist cultures," said Jenny Town, a research analyst at the Stimson Center and the managing editor of 38 North, an academic news site about North Korea. "Once they start to get different points of contact with the West, it changes their views - and it usually starts with McDonald's or Coca-Cola."

At this point in negotiations, creative ideas are needed to try and get Kim Jong-un to give up his arsenal. As Ambassador Susan Rice noted today on CBS' "Face the Nation" this is going to be a long, complicated process that cannot be judged based on one meeting.

"...It's clear that the past set of efforts have not succeeded. I am a believer in diplomacy and I am open to- to new methods of trying to accomplish the- the consistent objective that we have of full denuclearization. I think the question is are we walking in prepared? Are we walking in with our allies behind us? Are we in a position to understand that one meeting it's not going to be one and done. This is the start of a serious negotiating process," Rice said today.