It’s No Big Deal, But ISIS Might Be In Afghanistan 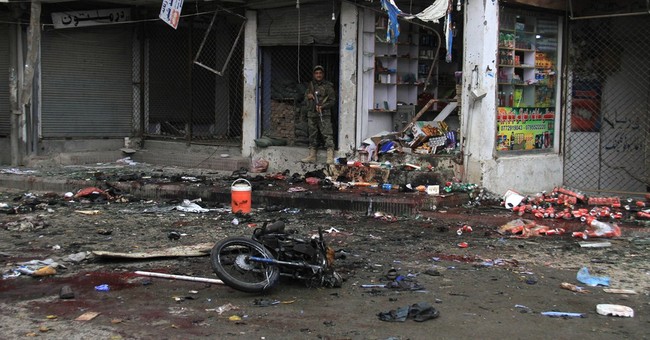 The Obama administration might have to reassess the strategic situation in Afghanistan after allegations that the horrific suicide bombing in Jalalabad on April 18 was the work of the Islamic State. People waiting to collect their salaries formed a line outside the New Kabul Bank branch, where a man detonated his vest, killing 35 and wounding over 100 people, according to NPR. The Taliban did not claim responsibility; they actually condemned the attack.

While the Afghan president has said ISIS claimed responsibility, this hasn’t been confirmed yet. If true, it complicates the withdrawal plans for the Obama administration, which is trying to draw down American presence in both theaters (via the Atlantic):

Appearing on national television after the attack, Afghan president Ashraf Ghani claimed that a local affiliate of the Islamic State, also referred to by its Arabic acronym Daesh, was responsible.

The involvement of ISIS has not been independently confirmed. But if Ghani is correct, Saturday's attack is an ominous development in a country struggling to combat a brutal insurgency from the Taliban, an indigenous Afghan group recently strengthened by an influx of foreign fighters.

On Saturday, a Taliban spokesman denied responsibility for the attack. But the group remains a lethal presence in Afghanistan. According to the Council on Foreign Relations,

Taliban violence claimed the lives of over 8,600 civilians in 2013 alone, and the group threatens government control of an estimated 40 percent of the country's 373 districts. A military crackdown on Islamic extremism in Pakistan has caused militants to cross the border into Afghanistan, where they have found refuge with the Taliban. With the onset of spring—the traditional fighting season in Afghanistan—extremist violence will only intensify.

"Considering the influx of foreign fighters in Afghanistan, this fighting season will be the bloodiest fighting season," Atiqullah Amarkhel, a military analyst in Kabul, told the Washington Post.

Afghanistan's violence poses a significant problem for the Obama administration, which seeks to wind down American involvement in the country. In March, Ghani persuaded Obama to maintain around 10,000 American soldiers in Afghanistan through the end of 2015—double the number that Obama had planned. Additional revisions to Obama's plan appear likely.

It may come to a point where another influx of American forces is needed to provide further stability to the region. Moreover, the chances of American forces engaging ISIS are now increased if this does turn out to be an ISIS attack, which is something the Obama administration has been trying to avoid.

While jobs and the economy will be the central issues of the 2016 election, foreign policy looks as if it will play a larger, though not overbearing, role next year.  Another pickle for Hillary who will have to answer to the ongoing failure of Obama's foreign policy, which she presided over as our chief diplomat for much his presidency.