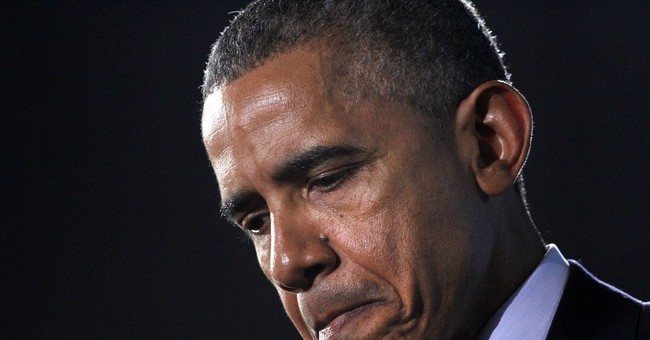 YEMEN, a country President Obama touted as a foreign policy "success" story in 2014, whose US-supported government has since been overthrown by rebels backed by...the country with whom we're currently negotiating a bad nuclear deal:

Syrian President Bashar al-Assad is brazenly challenging the latest U.S.-led effort to stop him from using chemical weapons, and the Barack Obama administration has yet to say if it will do anything about it. Two weeks ago, the U.S. got the United Nations Security Council to adopt a resolution calling on the Syrian regime to cease dropping barrel bombs filled with chlorine gas on civilians. U.S. Ambassador to the UN Samantha Power said the resolution, which passed 14-1 and was endorsed by all the permanent members including Russia, “made it crystal clear that the use of chlorine weapons was no less evil than that of chemical weapons.” Yet on Monday, Assad's military killed at least six civilians, including three children, and injured dozens with a chlorine gas bomb attack in the northwestern city of Sarmeen...


You'll recall that under the Assad/Putin/Kerry deal, Syria was to fully disarm itself of banned WMDs in order to avoid military reprisals. Not only did they utterly fail to do so, they've now crossed yet another "red line" by repeatedly deploying the weapons they supposedly discarded. The consequences for this lawless butchery? A seat a the negotiating table. Sec. Kerry went from calling Assad a modern day Hitler to insisting that we must negotiate with him (Hillary infamously dubbed him a "reformer"). Consider that Mr. Kerry is at present leading a much higher-stakes negotiations with Iran.

IRAN/ISIS - Obama has effectively outsourced much of the anti-ISIS fight on the ground in Iraq to Iran (Tehran already pulls the strings in Syria).  Power vacuums are inevitably filled by someone, and Obama's reckless failure to achieve a status of forces agreement in Iraq guaranteed that such a perilous situation would arise in that country.  The void is being filled by the monsters of ISIS and the monsters of Iran.  Here's Gen. Petraeus, today:

I think Iraq and the coalition forces are making considerable progress against the Islamic State. In fact, I would argue that the foremost threat to Iraq’s long-term stability and the broader regional equilibrium is not the Islamic State; rather, it is Shiite militias, many backed by — and some guided by — Iran. These militia returned to the streets of Iraq in response to a fatwa by Shia leader Grand Ayatollah Sistani at a moment of extreme danger. And they prevented the Islamic State from continuing its offensive into Baghdad. Nonetheless, they have, in some cases, cleared not only Sunni extremists but also Sunni civilians and committed atrocities against them. Thus, they have, to a degree, been both part of Iraq's salvation but also the most serious threat to the all-important effort of once again getting the Sunni Arab population in Iraq to feel that it has a stake in the success of Iraq rather than a stake in its failure. Longer term, Iranian-backed Shia militia could emerge as the preeminent power in the country, one that is outside the control of the government and instead answerable to Tehran.


In spite of his fall from grace, Petraeus was the military genius responsible for turning around the Iraq war, and later served as the director of the CIA. He's deeply informed. These comments matter. Iran is on the march, yet our president is walking on eggshells with the regime, desperate to forge a weak nuclear deal, and eager for them to help take care of his short-term ISIS problem. A strategic disaster.  As Benjamin Netanyahu told Congress, in the case of ISIS vs. Iran, "the enemy of your enemy is...your enemy:"