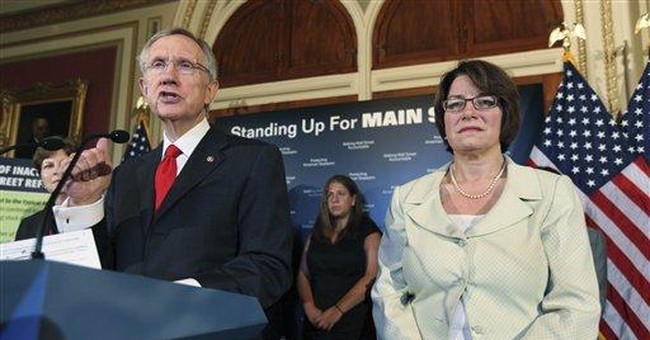 Guy wrote at length about this debacle in the Senate over an anti-human trafficking bill. It’s a no-brainer piece of legislation. Sen. Rob Portman’s (R-OH) press release about the Justice for Victims of Trafficking Act, which was introduced by Sen. John Cornyn (R-TX), lays out the details. It’s insanely bipartisan, but Democrats ran for the bunkers when they read the provision banning taxpayer-funded abortion (the Hyde Amendment), which they say was snuck into the bill. Uh, no [emphasis mine]:

Read the whole Politico story, which lays out the facts -- which, in turn, lay the blame for this embarrassing debacle directly at Democrats' feet. Recapping: Prosaic legislative language restricting taxpayer funding of abortion was included in Republicans' anti-sex-trafficking law. GOP authors alerted their colleagues on the other side of the aisle that this provision was coming a few months ago. The resulting bill received zero dissenting votes in a Senate Judiciary Committee vote. But once pro-abortion activists started raising hackles, Democrats decided to filibuster a law that would help victims of sex trafficking. This, from the party that carries on about the so-called "war on women." In a feeble attempt to defend their decision, Democrats initially and falsely claimed that Republicans "snuck" the language into the bill, then were forced to retreat to "we didn't read the bill."

Note well that McConnell offered Democrats an up-or-down vote to amend the bill by stripping out the abortion language. Democrats promptly objected to having the opportunity to vote on that specific item, which is ostensibly their entire basis for obstructing the underlying legislation's passage.

Just so we're crystal clear, Senate Democrats' apparent commitment to (deeply unpopular) taxpayer-funded abortion is causing them to actively block an anti-human-trafficking bill. They knew the pro-life language was in there for months, but now they're pretending to have suddenly discovered it, to their shock and horror -- but they don't want to actually vote on whether to strike the supposedly offending language. Incredible. The Democratic Party, with lots of cover from a news media heavily populated with pro-choice coastal elites, routinely paints Republicans as "out of the mainstream" on abortion. In reality, it's Democrats whose top officials and extremist allies are wildly out of step with the public. President Obama, for instance, favors taxpayer-funded late-term abortion on demand. Planned Parenthood can't distinguish between infanticide and abortion, which probably explains why they've been such fans of Obama. House Democrats killed a law to outlaw barbaric, often misogynistic, sex-selective abortions. California Democrats approved a measure allowing non-doctors to perform abortions. Virginia Democrats distorted the truth beyond recognition to attack a common-sense proposed abortion limitation. Many conscientious Americans are pro-choice, but these are the beliefs and actions of pro-abortion zealots.

Regardless, Democrats continue to channel Sgt. Schultz on this matter.

Now, the Associated Press has more evidence that Democrats did know about the provision. An aide to Democratic Sen. Amy Klobuchar (D- MN) had seen the language before the bill was voted on in committee:

Democrats have said for more than a week that their side of the aisle was not aware of the provision until a few days ago, nearly two months after the legislation was made public and long after a bipartisan vote in the Judiciary Committee on Feb. 24.

Several Democrats have accused Republicans of sneaking it into the measure without their discovering it.

But Julia Krahe, a spokeswoman for Sen. Amy Klobuchar, said that an aide to the Minnesota Democrat "had seen the language" relating to abortion before the committee voted.

The aide "did not inform the senator. The senator takes responsibility for the work of her office and missing the provision and she is focused on moving forward to find a way to fix the bill and protect victims of trafficking," Krahe added. Her disclosure came in an email Tuesday evening in response to an inquiry first made a week ago.

Klobuchar is a leading Democratic advocate for the trafficking bill.

Over at the left-leaning Huffington Post, they obtained an email exchange between Democratic and Republican Judicial Committee staffers where changes were listed, with the exception of the non-controversial abortion language:

The Huffington Post obtained a January email exchange between Democratic and Republican Judiciary Committee staffers regarding the bill's reintroduction and its changes from the last Congress. The Republican staffer lists seven changes, but the abortion language was not included.

"They added the new language quietly, hoping nobody would notice, then we'd all march down there," Sen. Barbara Boxer (D-Calif.) said last week. "I put my name on this bill, by the way, because my staff trusted the Republican staff when they said there wasn't any change in abortion language. How awful it was for my staff that they said to me, 'Senator, we feel terrible, we took their word.' And I got my name off this bill."

Except when you read the Politico piece Guy cited in his post, you see that the anti-abortion language is featured on page four and five of the bill, meaning that Democrats had the opportunity to catch the rider. Sen. Patrick Leahy (D-VT), who’s quoted in the HuffPo piece, said the provision expands Hyde to include traffickers’ fees.

Senate Minority Leader Harry Reid (D-NV) said earlier this week, “You can blame it on staff, blame it on whoever you want to blame…but we didn’t know it was in the bill, and … the bill will not come off this floor as long as that language is in the bill.”

It still doesn’t absolve Democrats for being incapable of reading the first five pages of a bill they at first supported, nor not taking Sen. McConnell's offer to strip the language from the bill, which would certainly make them look like the party of abortion (which they are). Still, Senate Democrats opted to die on this hill; relegating the protection of children from sex traffickers to a periphery issue since they’re so caught up with government bills that directly or indirectly permit the funding of abortion. That's still extreme. It’s a fetishistic trait that’s incredibly disturbing with the left.

Oh, and the bill was filibustered by Democrats again today.

3 times Sen. McConnell has forced through a human trafficking bill that contains abortion language. 3 times that has failed.