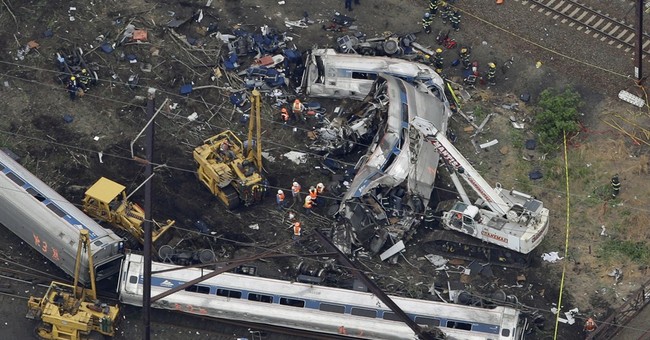 In light of Monday's deadly Amtrak train crash, liberals are jumping at the opportunity to spend more of you money on the railroad line in the name of "safety investment."

"We've been very clear about what we think is the appropriate level of funding for Amtrak and the President's budget is I think what's nearly a billion dollar increase in funding for Amtrak. There are extensive infrastructure upgrades that could be made that would benefit the traveling public, it would be good for our economy and that's why we've long advocated for those kinds of investments. Republicans unfortunately are currently considering legislation at the Committee level that would actually cut funding from Amtrak's budget by I believe a quarter of a billion dollars a year. That certainly is not consistent with the kinds of priorities that the President has advocated and sought to advance," White House Press Secretary Josh Earnest said Wednesday.

Democratic Congressman Steve Israel railed during a Committee meeting about Tuesday's crash being a result of crumbling infrastructure. MSNBC is on the same page. It wasn't, but instead a result of a train going 100 mph in a 50 mph and hitting a curb.

Here's the reality: It costs less to fly on an airplane from New York City to Los Angeles than it does to take the Amtrak Acela train, and sometimes the Northeast Regional train, from Washington D.C. to New York City.

"Amtrak is a heavily-subsidized rail service with Russian quality at Swiss prices. It is the shame of the developed world." As it turns out, he was being a little too generous.

Swiss rail travel is actually affordable compared to the U.S. A weekend round trip between Geneva and Zurich costs about $189, or $0.53 per mile traveled. A weekend round-trip from D.C. to New York, on trains leaving at a reasonable hour (e.g., not in the middle of the night) will run you about twice that much, or $0.98 per mile. And if you were to take the Acela you'd be paying almost twice as much as that for the privilege of arriving 35 minutes earlier.

Further, Amtrak can't even find a way to make a profit on the cafe car. In fact, they lose millions of dollars each year on food.

Amtrak lost more than $800 million on its food and beverage services over the last 10 years, largely because of waste, employee theft and lack of proper oversight, government auditors have found.

The railroad’s food and beverage service has never broken even since it was required by Congress to do so in 1981. The losses were the focus of a House Transportation and Infrastructure Committee hearing on Thursday that reflected partisan views over how Amtrak should be run. Republican lawmakers suggested that food services should be privatized. Democrats questioned the need for the hearing, saying the railroad was dealing with the losses.

The good news is, Republicans voted yesterday to cut Amtrak funding. In the real world, this would mean the rail line will become more efficient with fewer resources. In government, however, nothing will change and politicians will keep "investing" in a terrible system.