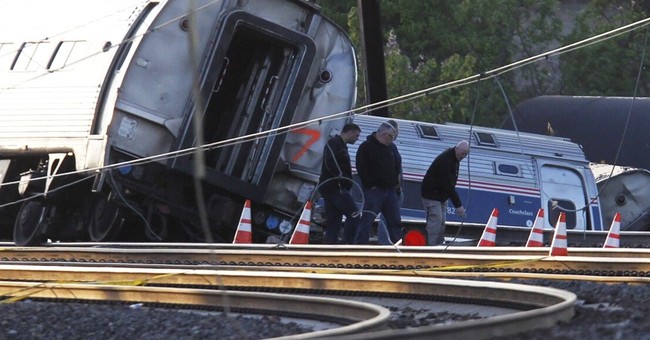 In light of last night's horrific Amtrak crash, which left hundreds injured and six dead, the White House is reminding Americans that President Obama wants to increase funding for the train system while those evil Republicans want to cut it.

"We've been very clear about what we think is the appropriate level of funding for Amtrak and the President's budget is I think what's nearly a billion dollar increase in funding for Amtrak. There are extensive infrastructure upgrades that could be made that would benefit the traveling public, it would be good for our economy and that's why we've long advocated for those kinds of investments. Republicans unfortunately are currently considering legislation at the Committee level that would actually cut funding from Amtrak's budget by I believe a quarter of a billion dollars a year. That certainly is not consistent with the kinds of priorities that the President has advocated and sought to advance," Press Secretary Josh Earnest said Wednesday.

It is important to point out that the reason for last night's crash wasn't a lack of funding, but instead because the train was going 100 mph in a 50 mph zone.

Despite being funded by taxpayers at $1.4 billion per year (and by $50 billion over the course of its implementation 40 years ago) in addition to customers purchasing expensive tickets, Amtrak loses close to $1 billion annually. The rail system has been called a "massive failure" by one of its founders.

But sure, let's throw more money at a system that is completely inefficient and non-profitable despite massive, heavy subsidies and over-priced ticket purchases from hard working Americans.