Obama: Let's Face It, Obamacare is Blowing Away Expectations 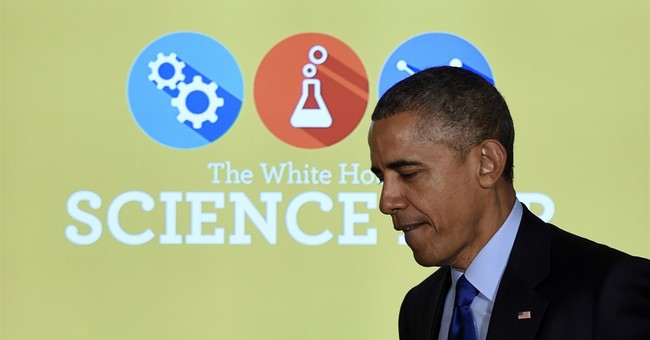 Yesterday marked the five year anniversary of Obamacare, a bad law that ought to be repealed. Its defenders jump through hoops to declare it a "success," ignoring empirical data while dragging goalposts for miles, hoping that Americans will forget the central promises upon which it was sold and rammed through Congress. In the positive column, the law does appear to have reduced the ranks of the uninsured in America, including a significant number of previously-uninsurable people. Of course, when you pass a law that requires people to obtain insurance, touting the fact that millions of people ended up abiding by your mandate is pretty weak.  Also, the majority of those "newly insured" through the exchanges previously had coverage. On the other side of the ledger, Obamacare has failed to substantially reduce all Americans' premiums (they've gone up for the vast majority of people, with the worst yet to come), it has substantially increased health costs for tens of millions (out of pocket costs are astronomical for many), it has stripped people of their preferred plans and doctors, it has exacerbated primary care doctor shortages, it has inflicted "access shock" upon consumers, it has increased the government's healthcare tab, it has impeded economic growth, it has hurt employment, and polls show that it has actively harmed many more people than it's helped.  Those are facts (click through for tons of citations), and they constitute major failures -- far beyond the infamous and costly roll-out debacle, the repercussions of which are still being felt to this day. And yet, President Obama has smirkingly pronounced his signature law a success beyond his wildest dreams, ludicrously claiming that every prediction critics made has been proven wrong:


It was one thing for them to argue against Obamacare before it was put in place. Every prediction they made about it turned out to be wrong. It's working better than even I expected. But it doesn't matter. Evidence be damned. 'It's still a disaster.' But why?


Here, Obama accuses others of cranking out misinformation about his law and mindlessly rejecting evidence to the contrary. This is textbook projection. It's embarrassing. Virtually every major Obamacare prediction he made "turned out to be wrong" -- and his administration knew they were misleading the public, in certain cases.  The architect of the law bragged about this dishonesty for years. The objective evidence overwhelmingly vindicates critics, yet the Left insistently conjures and alternate reality, sneering at those who've dared to notice their glaring failures.  They keep asserting that Obamacare is working well and defying its naysayers' cynicism, those poor souls, so blinded by ideology that they're forced to deny the settled science. In fact, Americans continue to disapprove of the law because they are living and experiencing its effects.  No amount of self-satisfied condescension and spin can change reality.  I'll leave you with a reminder that Obama 3.0 is fully committed to protecting the ongoing failure of Obamacare, using the same tired arguments in its defense. After all, it was her plan first:

Repeal of the ACA would let insurers write their own rules again, and wipe out coverage for 16 million Americans.

This filing season, for the first time, millions of Americans are facing tax implications — and new forms that even seasoned preparers are finding confusing — related to their health insurance status. The changes are not only complicating things for tax filers, but also costing many of them money. Under the Affordable Care Act, people who remained uninsured last year must either pay a penalty with their taxes, one of the most contentious elements of the law, or claim an exemption. The Obama administration has said up to six million people would owe a penalty of $95 or 1 percent of their household income, whichever is greater. But as many as 30 million people are getting exemptions, mainly because they are too poor to afford health insurance or because they live in a state that refused to expand Medicaid last year under the health law. And people who did get insurance but, like Mr. Ciesielski, underestimated their income for 2014 — the figure on which subsidies are calculated — are being required to pay back part of their subsidy.


Soak in the success, people.  The law's wonders are surpassing the president's wildest dreams.  Applaud with gratitude, or shut up, you ignoramus.