Young Voices Contributors
|
Posted: Mar 30, 2019 12:01 AM
Share   Tweet
The opinions expressed by columnists are their own and do not necessarily represent the views of Townhall.com. 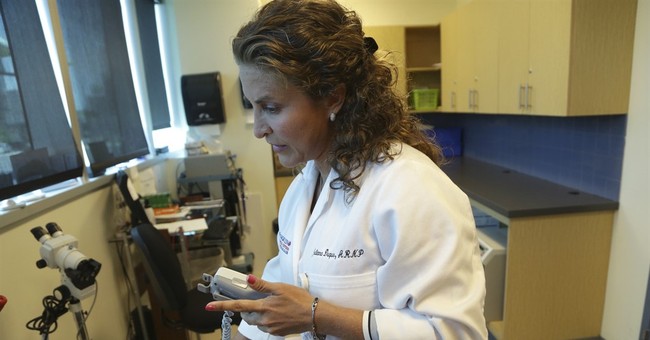 Editor's note: This column was written by Adam Barsouk.

During President Trump’s never-ending fight for a border wall, actual immigration reform has been swept under the rug once more. But border security aside, increasing legal immigration to enable desperately-needed medical professionals to help Americans could be the most lasting piece of President Trump’s legacy—if he’s willing to do it.

My parents escaped from the persecution of the Soviet Union and legally immigrated to the U.S in 1996. Since then, they’ve saved thousands of American lives as physicians. But their story is the exception, not the rule. In spite of an impending shortage of doctors and both parties’ empty promises of immigration reform, my aunt (a doctor), cousin (a medical student) and other relatives have been waiting for decades to do the same. My family isn’t unique—our highly-restrictive legal immigration system locks countless qualified medical professionals out of our country.

Yet our politicians still love to preach freedom and opportunity at home and abroad, especially in countries like my family’s native Ukraine. In a bloody, oft-overlooked revolution in 2014, Ukraine overthrew a pro-Putin regime, wrecking its economy and losing its main gas supply (from Russia)—all in the hopes of joining the democratic West. We’ve responded with a cold shoulder, with European Union (EU) President Juncker even saying that it would take decades, if not longer, for Ukraine to join the EU. As Ukraine fruitlessly struggles for Western integration, the proxy war with Russia carries on, quietly eating away at young lives and resources.

To escape the Soviet Union and find political liberty, my parents left behind their friends and family to move to a strange new land, with only $50 in their pockets and a much-needed dictionary in hand. Today, they liberate patients from disease, and this same commitment is carried on by my relatives still in Ukraine. In Ukraine, my aunt is a physician, my grandfather manages a military factory, and my cousin Alex is set to be drafted into the army—all of them spilling sweat and blood for a land that only 16 percent of Americans can find on a map. Over the past five years, some 13,000 Ukrainians have perished in their silent struggle.

But Ukrainians aren’t the only ones denied a shot at life in the U.S. Our relatives are among  millions who have waited decades for the opportunity to immigrate to the land of the free. My aunt and cousin are just a few of the thousands waiting to join the essential pool of U.S. physicians who have come from overseas. Immigrants currently make up a quarter of the profession.

Working in the hospital, my aunt witnesses trucks arrive from the battle front carrying injured soldiers. Many of the young men she treats are beyond salvation—but she’s learned to do whatever needs to be done. Her skills could save lives in trauma centers across the U.S.

Her son, my cousin Alex, is in medical school. But when he completes his education, he won’t get to be a doctor like he could be here. Instead, he’ll be drafted to the ranks of the Ukrainian soldiers fighting and dying against Russia-backed mercenaries.

Alex had hoped to visit us for two weeks this summer before returning to school. But his application for a visa was denied by the U.S. embassy, even after our senator get involved on his behalf. The government was worried that Alex would overstay his visa. So broken is our immigration system that 700,000 foreigners overstayed their U.S. visas last year instead of trying to remain here legally.

As the number of applicants increases each year while quotas stagnate, wait times for a green card today have reached up to 150 years for holders of advanced degrees (like MDs). Many have stopped trying altogether—only 7,000 foreign grads applied to become U.S. doctors last year, about 400 less than in 2016. The immigration process must be simplified, quotas expanded or eliminated, and preference given to those with valuable education and skills. Studies show that foreign doctors are more likely to work in underserved rural and urban communities. And with an impending shortage of 120,000 physicians by 2030, why should the U.S. continue to turn away immigrant doctors, eager to work in whatever underserved area they can? The current state of affairs is a strained, ill-conceived immigration system that’s doing a disservice to Americans.

With casualties of over 13,000 over the past five years, Ukraine’s situation is no less dire than the humanitarian crises in Latin America that push so many illegal immigrants to our borders. Yet, families like mine hold out hope in the American dream, one of freedom and respect for the law—and maintain faith that after decades in line, their turn will come to legally immigrate as essential professionals. Our political leaders must make their dream come true, for everyone’s sake. President Trump should partner his border security initiatives with genuine immigration reform. Imagine the political implications: A president labeled racist, anti-immigrant and pro-dictator by his detractors could be the one to empower diverse immigrants to escape dictatorships and save American lives.