Ilhan Omar Should Visit The 9/11 Memorial And Museum

William Marshall
|
Posted: Apr 15, 2019 12:01 AM
Share   Tweet
The opinions expressed by columnists are their own and do not necessarily represent the views of Townhall.com. 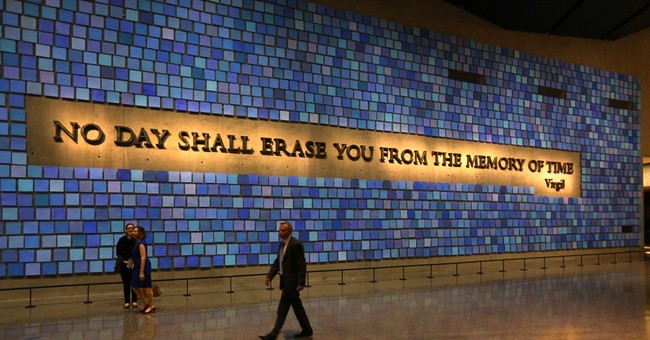 Demonstrating a shocking level of ignorance and callousness, Rep. Ilhan Omar recently said to a gathering of supporters of the Council of American-Islamic Relations (CAIR), speaking of the September 11, 2001 terrorist attacks: “CAIR was founded after 9/11 because they recognized that some people did something, and that all of us were starting to lose access to our civil liberties.” That’s right. She described the 9/11 attacks at a fundraiser for CAIR – a Hamas front organization and an unindicted co-conspirator in the Holy Land Foundation terror-financing case – as merely “some people did something.”

I think Ms. Omar would benefit from the same visit I made recently to the truly hallowed site of the terrorist attacks in Manhattan.

The all-encompassing look that the museum’s creators take of the attack of that horrible day addresses all the aspects of it, from its genesis in the minds of psychopathic Islamic terrorists, to U.S. intelligence agencies’ awareness of the 7th Century troglodytes who executed it, to the engineering feats of the great World Trade towers and Pentagon, to the lives of its hapless victims.

A personal and fittingly intimate consideration is given to all the nearly three thousand innocent men, women and children who died that day, while going about their routine business, when death came suddenly, without warning, in a burning, crushing and asphyxiating hell.

One exhibit discusses a woman in a business suit, hair disheveled, observed standing at the edge of a blown-out office window in one of the upper floors of a World Trade Center tower, with flame and smoke engulfing the interior of the office building behind her. She stood there for what seemed liked minutes to the eyewitness, but was undoubtedly an eternity to her, as she gazed down at the ground hundreds of feet below, knowing her options were few and her end on this earth was imminent.  Having made her peace, and choosing not to die in burning asphyxiation, this lovely woman made a choice I hope none of us ever must make. She clutched her skirt, in a touching moment of modesty, which to the eyewitness spoke to the intensely human nature of this horrific attack, and stepped off the ledge, plummeting to her death far below.

One of the most poignant exhibits we viewed in the great museum was a giant hall whose four walls were lined with photographs of all the victims from that day, smiling at the camera in a happier time. As my wife and I stood there, taking it all in, my eyes swept the seemingly endless array of pictures and landed on a photograph to my immediate left, just a couple feet away. It was of Tom Burke, a classmate of mine from Regis High School.

Tom had been a Managing Director of the firm Cantor Fitzgerald, which had its corporate headquarters at One World Trade Center, just above the impact point of one hijacked plane. Six hundred fifty-eight Cantor Fitzgerald employees, including Tom, died that day -- more than any other firm.

That moment was an especially eerie one for me. I had met Tom in an elective theology class called Death and Dying. Tom was not only wicked smart but had a winning personality and was a star player on our school’s basketball team. He was definitely cool, which was what made the fact that he went out of his way to introduce himself to me, a kid who didn’t travel in the same “cool circles,” even cooler. God bless you, Tom.

We moved along and I came upon the exhibits featuring the amazingly heroic first responders. One display was dedicated to some firemen who died that day, and included a photo of Michael Otten, who with his wife Marion, were dear friends of my sister and her husband, Marian and Mark. I had the wonderful opportunity to meet and Michael and Marion and got a tour of Michael’s firehouse when we all went into Manhattan to see a show one night in the early 90s. Mike was immensely proud of the New York City Fire Department and of his work as a fireman. He was a bear of a guy and one of the most jovial, kindest people you’d ever meet. Nobody doubted for a moment that he was exactly where he wanted to be, with his fellow firemen, helping people, when the Lord took him home that day.

When Ms. Omar makes comments like, “Israel has hypnotized the world, may Allah awaken the people and help them see the evil doings of Israel,” as she did on Twitter in 2012, she demonstrates that she has absorbed the same hateful outlook that galvanized savages from a medieval Middle East hell to attack the apex of Western civilization. And then there is Ilhan Omar blaming the America for terrorist attacks as a “reaction,” such as in a 2013 interview in which she said, “Usually most people want to not look internal and see what [about] their actions that makes another react. For us, it’s always ‘I must have not done anything. Why is it happening to me?’ Nobody wants to take accountability of how these are byproducts of the actions of our involvement in other people’s affairs.”

Perhaps Islam’s 1,400-year history of savagery against peaceful non-Islamic people has something to do with it too, Congresswoman.

Democrats as a whole must recognize anti-Semitism is gripping much of their party now, as former Democratic Senator Joe Lieberman recently warned. Perhaps they could start with a visit to the 9/11 Museum, along with Rep. Omar, to see where such hatred leads.

William F. Marshall has been an intelligence analyst and investigator in the government, private, and non-profit sectors for more than 30 years. He is a senior investigator for Judicial Watch, Inc. (The views expressed are the author’s alone, and not necessarily those of Judicial Watch.)