Vijay Jayaraj
|
Posted: Aug 15, 2019 12:01 AM
Share   Tweet
The opinions expressed by columnists are their own and do not necessarily represent the views of Townhall.com. 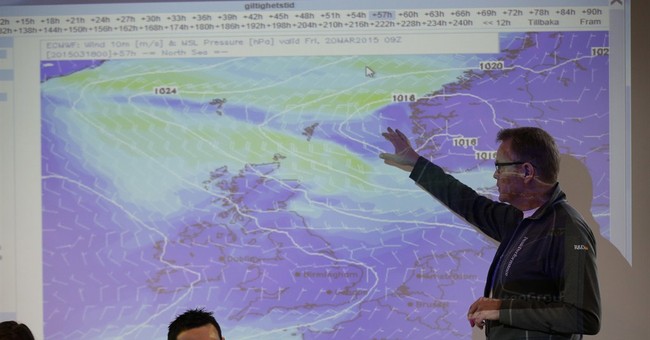 Celebrities, politicians, and leaders across the globe are divided on the dangers of climate change and the best ways to address the problems arising from it.

In light of the vast differences, it would be wise for any observer to understand the finer details of the climate debate, the origins of claims, and the history of it, before they begin to trust these voices.

Given man’s high proclivity to bias, it is necessary to inspect the climate issue through the lenses of currently prevalent biases. Sackett in his 1979 paper defined bias as “any process at any stage of inference which tends to produce results or conclusions that differ systematically from the truth.”

The climate change issue, like any other issue of public interest, has been subject to numerous biases. Here are just a few and why they have misled us in a big way.

Confirmation Bias: The act of referencing only an opinion or evidence that fuels one’s pre-existing view, while dismissing any contrary evidence or opinion—no matter how valid.

This bias became very evident during the past two decades, when the computer climate models used by climate scientists failed dramatically in their climate forecasts. Biased scientists and politicians completely ignore the failure.

Almost all of the current policy discourse in climate change is entirely dependent on these faulty models. Instead of admitting a grand failure in their predictions, the scientists and political leaders continue to use these faulty forecasts for policy decisions.

There are people with confirmation bias in the other end of spectrum as well. Also known as climate deniers, they deny climate change entirely. They don’t believe in the gradual yet safe warming that has been scientifically proven to be prevalent since the 18th century.

Groupthink Bias or Bandwagon Effect: For the sake of avoiding conflict, people may agree upon a given perspective without critical evaluation. The society as a whole may agree upon theories that deviate from the truth.

This is the biggest of all biases to haunt the climate change issue and has proved to be the biggest hurdle for the progress of climate sciences.

Just as in the days of Galileo, we have swathes of academic and political institutions that suppress critical assessment of their dominant doomsday perspective. Groupthink bias has provided the fodder for their attitude to suppress dissenting voices.

A classic fallout of this bias is the recent school strike by children across the globe. None of the children have graduate level education in climate sciences, and they merely chose to adopt the groupthink mentality without critically evaluating the issue at hand—a task for which they lack the adequate factual knowledge and theoretical understanding anyway. Some children did try to question the whole school strike movement, but they were quickly reprimanded and put to silence.

The Bias of Clustering Illusion: This bias occurs when we look innately for patterns in random data, eventually making conclusions based on a small sample set or pattern, rather than assessing them in context with the entire data.

The short-term warming in 2016—caused by the El Niño weather pattern—was considered an indicator of extreme long-term warming by the alarmists, and the mainstream media eventually promoted it as a sign of climate doomsday.

However, in reality, the 2016 warming occurred in the midst of a 20-year period (1999–2019) when the rate of warming slowed down globally and was even acknowledged by top climate scientists.

The alarmists are guilty of the clustering bias not just during the El Niño of 2016, but throughout the past few years when they cherry picked many such short-term weather patterns and deliberately termed them signs of climate apocalypse.

For example, the alarmist misinterpretation about the dangers of Arctic sea ice melting falls under the clustering bias. Yes, the Arctic has been melting ever since the end of Little Ice Age in the 17th century, but the historical climate data—for the past 10,000 years, the Holocene climate period—indicate that Arctic ice is at one of its highest levels.

Also falling in the clustering bias is the alarmist interpretation of the role of carbon dioxide in the modern warming period. During 1979–1999, the correlation between atmospheric carbon dioxide concentration levels and rising global temperature led alarmists to conclude that CO2 emission from human activity was causing the warming.

However, a look at historical data suggests that CO2 concentrations are not the primary drivers of global temperature and that there are a host of other natural factors that affect the temperature. Besides, the current warming trend began well before the industrial era, when emissions from human activity were insignificant.

Satellite temperature data (December 1978 to June 2019) show that global temperature levels have failed to rise to the levels that they had during the super El Niño of 2016.

The highest temperature departures during 2017 and 2018 were lower than 2016, despite the total atmospheric CO2 concentration increasing by every year.

It categorically proves that CO2 is not the primary driver of temperature, a fact that can be identified and confirmed by assessing the historical climate records as well.

The bias list continues, but let me just stop here and conclude that without critical evaluation of claims made about our climate, we are likely to be victims of these biases (both deliberate and unintentional ones).

Yes, the world is warming, but not at an unprecedented rate, and there is no scientific evidence to conclude that climate change in the coming years will be dangerous for our society or the environment.

The real climate crisis is the one where billions across the world have been misled about the current and past state of our world’s climate.