When A War Went Worldwide 75 Years Ago

Victor Davis Hanson
|
Posted: Jul 28, 2016 12:01 AM
Share   Tweet
The opinions expressed by columnists are their own and do not necessarily represent the views of Townhall.com. 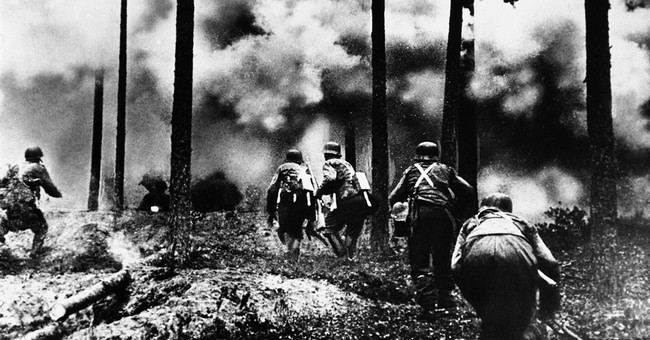 Seventy-five years ago, the world blew up in just six months.

World War II ostensibly started two years earlier, when Germany invaded Poland. In truth, after the rapid German defeat of Poland in September 1939, the conflict was mostly confined to Western Europe for nearly the next two years. By summer of 1940, only Britain had survived Hitler's European victories.

The dormant European war only went global on June 22, 1941, when Germany suddenly surprise-attacked the Soviet Union, its former partner.

America and Asia were still not directly involved in the 1941 expansion of the war until the Japanese attacked Pearl Harbor and British Malaya on December 7-8.

Yet the war was even then not truly global until Germany and Italy inexplicably declared war on the United States on December 11.

America was suddenly mired in a two-front war on land, sea and in the air against the Axis powers -- from the Arctic Circle to the Sahara Desert, and from the coast of Florida to China.

These three calamitous events of 1941 marked the real beginning of World War II, in which some 65 million perished, more than 60 percent of them civilians.

Hitler had no need to attack the Soviet Union, a vast country that even Napoleon could not successfully invade and one that was supplying vast amounts of natural resources to his German war machine.

Japan likewise had no reason to bomb the British and Americans in the Pacific. Neither democracy was planning to start a war with the Japanese.

Industrial Japan could have gotten most of its oil from the Dutch East Indies, modern Indonesia. Its colonial master, the Netherlands, had been conquered by Germany and was no longer a colonial power.

An aggressive Japan likewise could easily have had all of Indochina and other orphaned European colonies without triggering a war against the world's two largest navies.

Had Germany not declared war on the United States after Pearl Harbor, it is likely that America would have focused on Japan and left Britain alone to fight Germany -- just as it had done since 1939.

So why did the three Axis powers commit such blunders that would lose them the new global war in less than four years?

After conquering all of Western Europe, Hitler's Germany felt itself invincible. It saw the Soviet Union as weak and ripe for a double-cross.

Japan had carved out large swaths of China and likewise felt all-powerful. It had little respect for an isolationist America, in the same manner that Hitler had discounted Russia.

Italy and Germany ignored the obvious industrial might of the United States. They declared war without calculating that they could not even make an aircraft carrier or four-engine bomber, while America could produce them in huge numbers.

Hitler and Mussolini also never stopped to think that neither power could reach America, while the United States had the potential to bomb Europe and make a military landing there.

All three Axis powers boasted of the superiority of their fascist militaries. But the Germans, Japanese and Italians never paused to add up the populations, resources and economies -- not to mention the morale and determination -- of their new global enemies: Britain, the Soviet Union and the United States. Collectively, the Allies enjoyed vastly greater assets than the Axis powers.

What can we learn about the Axis powers' disastrous choices of that fateful year, 75 years ago?

Weaker nations often stupidly start wars against stronger ones, especially if they think national strength is judged only by willpower and not by factories, oil, resources, arms and men.

Wars also take on a strange logic of their own. Once the shooting starts, leaders whip up public opinion, seek out new enemies and allies, and delude themselves that their conflict will be neither long nor costly.

Today, terrorist groups such as ISIS and nations such as Russia, China, North Korea and Iran all wrongly believe that much stronger but sometimes directionless Europe and the United States are weakening and have lost deterrence.

In a sane world, it would be utter folly for ISIS to try to repeat a 9/11-like terrorist attack. It makes little sense for Russia to annex the Baltic states in the manner of the Crimea. It would be stupid for China to prompt a sea or air fight with Japan or Taiwan. Nonetheless, all these powers may convince themselves the perceived benefits outweigh the costs.

Iran has concluded that rogue countries that acquired a bomb (North Korea and Pakistan) became more powerful and respected by the West, but nations that gave up their nuclear programs (Libya) or had them dismantled (Syria and Iraq) either were conquered or torn apart.

We should be careful this anniversary year. War starts when weak but aggressive nations are deluded into believing that they are powerful -- and wrongly conclude that the truly strong and rational are somehow weak.