The Way of All Appeasement 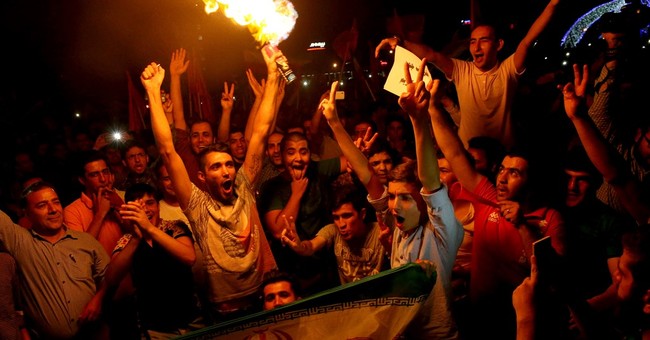 While members of the Obama administration are high-fiving each other over a deal with the Iranian theocracy, they should remember unchanging laws that will surely haunt the U.S. later on.

First, appeasement always brings short-term jubilation at the expense of long-term security. British Prime Minister Neville Chamberlain was a beloved peacemaker after the Munich Agreement of 1938 with Adolf Hitler but derided as a conceited fool and naif by May 1940.

A few years from now -- after Iran has used its negotiated breathing space to rearm, ratchet up its terrorist operations and eventually gain a bomb to blackmail its neighbors -- the current deal will be deeply regretted. Expect a Nobel Peace Prize for Secretary of State John Kerry now, followed by Chamberlain-like infamy later.

Second, the appeasement of autocrats always pulls the rug out from under domestic reformers and idealists. After the Western capitulation at Munich, no dissenter in Germany dared to question the ascendant dictatorship of Adolf Hitler.

Until last week, Iranian dissidents and reformers had blamed the theocracy for earning Iran pariah status abroad and economic ruin at home. Not now. The haughty ayatollahs are bragging that they faced down the West and will restore the economy -- as they wink to applauding crowds that Iran will soon be nuclear and dictate its terms to the Middle East.

Third, appeasers always wrongly insist that the only alternative to their foolish concessions is war. Just the opposite is true.

Time was not on Iran's side. Tehran was growing desperate for financial and commercial relief from global sanctions and embargoes. In contrast, the world had no such urgency and could have easily waited for a cash-strapped and ostracized Iran to give up on a bomb.

There were plenty of alternatives short of war in dealing with Hitler from 1936 to 1939, but none after. Expect that in five years Iran will be better armed, richer, more confident, more aggressive -- and nearly impossible to deter without the use of force.

Fourth, beneficiaries grow to hate their appeasers. Such ingratitude might seem counterintuitive, given the gifts that the Iranians have just received from the Obama administration. But we should remember that Hitler called his Munich appeasers "worms" and pushed them even further.

Under the rules of appeasement, an aggressor privately has only disdain for compromises that benefit him, and yet feels a weird sort of respect for those who deter him. Expect an emboldened Iran to double down on its anti-Americanism, as it brags about how a weak and decadent Great Satan meekly caved to its demands, which will only grow greater.

Fifth, allies are always the big losers in appeasement. Britain and France ensured the destruction of third-party Czechoslovakia by conceding to Hitler's demands in 1938 -- and doomed Poland in 1939.

Our apprehensive friends and allies in the Middle East -- the Gulf states and Egypt especially -- will naturally, for their own protection, expect the same sort of nuclear deal that we accorded our enemy, Iran.

America is for a while longer out of Iranian missile range. Not so the Arab world, Israel and perhaps southern and eastern Europe. Won't our Pacific allies also wish to keep their strategic deterrent options open by following the Iranian enrichment model?

Concessions to enemies naturally prompt allies into wondering why they do not receive similar latitude -- even on issues quite unconnected with military affairs. Were Western diplomats harsher on friendly Greece than they were to hostile and would-be nuclear Iran?

The cost of giving into Greece is hundreds of millions of euros; giving into Iran will involve blood rather than money. Perhaps if Greece just had a few thousand spinning centrifuges, it might have been bailed out more quickly by terrified Westerners.

After the Iranian agreement, expect a world of nervous and angry allies, the end of dissent inside Iran, the spread of Iranian-sponsored terrorism, more nuclear states, a growing contempt for alliances with the West, and a new Middle East that may have to adopt appeasement to deal with a haughty Iran, flush with new cash and arms.

Josef Stalin weighed carefully the democracies' appeasement of Hitler's serial aggressions in the Rhineland, Austria and Czechoslovakia. By 1939, the Soviet Union had fatally decided that it was as dangerous to have unreliable France and Britain as allies as it was having Germany as an enemy. So Stalin cut what proved to be a disastrous deal with Hitler that ensured World War II.

China and Russia will never again see any advantage in joining the West in embargoing and sanctioning a would-be nuclear state -- not when such a hard-won common front can become utterly nullified at any moment by a fickle United States. Both powers will grow closer to Iran.