Telling the Truth on Trade With China

Veronique de Rugy
|
Posted: Jun 28, 2018 12:01 AM
Share   Tweet
The opinions expressed by columnists are their own and do not necessarily represent the views of Townhall.com. 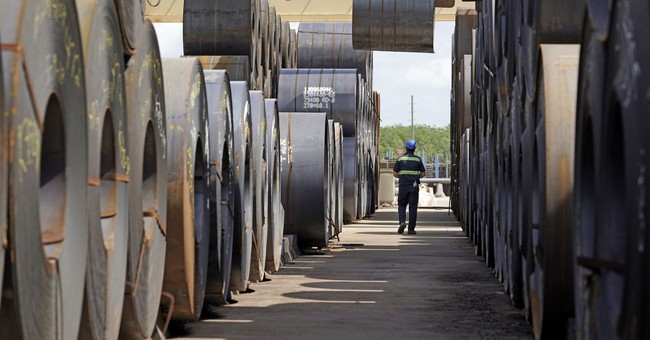 We hear quite a bit of misleading rhetoric against China these days. Let's grant, for argument's sake, that the Chinese overproduce steel, dump some of that steel into Canada and Europe before it makes its way to the United States, pilfer intellectual property and have a plan to dominate the world by 2025. It's still not a good reason to protect a few privileged American producers by slapping tariffs on the stuff other U.S. firms use to manufacture their goods -- or for the government to restrict the supply of goods that households consume to raise their standard of living.

Since when do free market advocates believe that a communist authoritarian regime like the one in China can successfully and centrally plan and execute economic growth? These days, newspapers are full of quotes by noted free marketeers who would usually oppose trade barriers such as those put in place by the Trump administration but nevertheless support such barriers because they worry that China's 2025 "plan" will successfully lead to its domination of many industries.

It's puzzling. George Mason University economist Don Boudreaux correctly commented on this inconsistency by writing that those on the political right who usually believe in markets "correctly understand that the U.S. government cannot out-perform the market at 'picking' winners, but they ... nevertheless believe that foreign governments, especially those governments with authoritarian histories and that currently possess authoritarian powers, are invested with uncanny abilities to improve the performance of their economies with subsidies, trade restraints, and industrial policies."

If these guys really believe that such a top-down government-controlled economy can work in China, why not try it here? And if it works so well in China, why doesn't it work in Venezuela or Cuba?

Also puzzling is the constant refrain about China producing more than it needs. Even if this overcapacity were a boon for China, it would still be to the benefit of millions of American consumers. It lowers costs for thousands of small U.S. manufacturers and steel consumers. But in reality, this "overproduction" is a tragedy for the Chinese people because their government's subsidization of steel production inevitably diverts resources from other areas of the Chinese economy. I don't hear Americans and Europeans complaining about all the stuff China isn't producing because its government stupidly wants to produce a lot of steel. So the next time you encounter someone lamenting China's overcapacity, shed a tear or two for the Chinese people and recognize that some American non-steel production might fall if (and when) Beijing stops diverting so many resources into Chinese steel factories.

"But what about American steel producers?!" some plead. If you think trade is the main culprit in the steel-industry woes, think again. For decades, Americans have imported between 25 and 30 percent of our steel. That leaves domestic steel with a healthy 70 to 75 percent of the market. To the extent that steel jobs were lost, the reason is that American steel executives implemented labor-saving innovations (read: technology) just like the rest of the manufacturing industries. These innovations made individual steel workers more productive and raised their wages. As a reminder, steel employment in the United States actually peaked in 1956, long before China entered in the picture.

"But the Chinese steal intellectual property from us!" others say. Still, the best way to protect the property rights of some Americans -- many of whom freely choose to operate in China under these conditions -- isn't to impose import taxes (tariffs) and thereby penalize millions of American consumers. Such "retaliation" by the U.S. government is a policy of picking winners and losers, which is unfair and inefficient. It also puts thousands of other American jobs in jeopardy, exposes us to retaliation and causes U.S. companies (like Harley-Davidson) to move their production abroad. The best solutions use international organizations to challenge China's actions and form alliances with like-minded allies.

I hope you won't read this piece as a defense of the Chinese regime. There's no excuse for the way it treats its people, abuses human rights and deprives the Chinese from free market economic policies. However, many of the arguments levied against China as they relate to trade either misidentify the true victims or advocate the wrong remedies. And let's not forget that new U.S. trade and investment restrictions won't make China more like us, but more government control over the U.S. economy will make us more like China.