Veronique de Rugy
|
Posted: Jun 21, 2018 12:01 AM
Share   Tweet
The opinions expressed by columnists are their own and do not necessarily represent the views of Townhall.com. 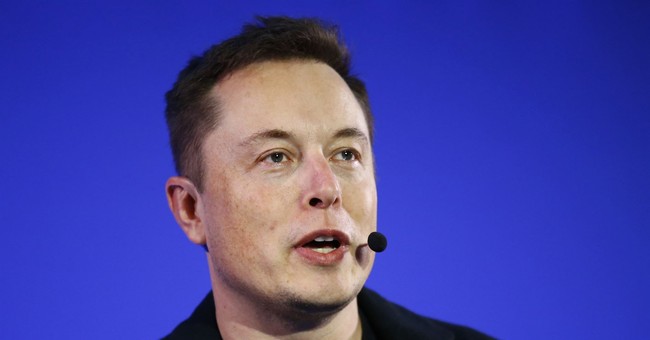 For manufacturers of electric vehicles, you might expect the accomplishment of moving their 200,000th unit to be met by celebration. However, because the threshold triggers the reduction of a juicy federal handout that props up electric vehicle sales, we're getting hand-wringing instead. There's even a push to expand the giveaway and keep taxpayers on the hook in perpetuity.

The $7,500 tax credit applies to the first 200,000 electric vehicles sold per manufacturer -- a threshold both Tesla and General Motors are about to hit -- at which point it is then phased out over the course of the subsequent year. The tax credit, along with many other renewable-energy inducements and incentives, unfortunately survived last year's tax reform. But that's not enough for its beneficiaries.

Tesla's chief executive, Elon Musk, has managed to make his company sound like a victim of the whole thing. Amazingly, he said during an earnings conference call that "it drives (him) crazy" for Tesla to be perceived as dependent on government subsidies and that "those fools don't realize" that "Tesla has succeeded in spite of the incentives, not because of them."

He must truly be an impressive leader for his company to survive under so terrible a burden as benefiting from taxpayer-funded subsidies for those who buy his products. But how are we taxpayers supposed to feel, knowing that we have been subsidizing some of the most expensive cars out there for the sole benefit of the richest Americans (a 2017 Tesla Model S sedan costs between $69,500 and $140,000) under a bogus excuse that it would help the technology develop?

Musk further argued, "What matters is whether we have a relative advantage in the market, and in fact the incentives give us a relative disadvantage." To a degree, he has a point, but he's ignoring the benefits his company has reaped from the tax credit and focusing narrowly on the downsides.

Musk is also right that California's Zero Emission Vehicle program gives an advantage to companies manufacturing both electric vehicles and traditional vehicles, because they can use the California Air Resources Board credits awarded for producing electric vehicles to offset their dirtier products, whereas manufacturers of EVs alone must sell them at reduced value on the market. Such perverse incentives are why governments should be wary of trying to steer markets in the first place.

Federally, when the credits for Tesla and GM are reduced or eliminated, they'll be at a disadvantage compared with other EV manufacturers. However, that's a problem that only exists because of the benefits received up to this point. For most consumers, Tesla's products are competing against all vehicle types, not just EVs. And the tax credit has afforded the company's products a tremendous advantage over nonelectric vehicles.

In other words, any downside of being among the first to hit the end of the federal tax credit pales in comparison with the benefits of receiving the credit at all. So for the sake of taxpayers, legislators should resist falling for Musk's crocodile tears if it means prolonging availability of the credit. Eliminating it altogether, on the other hand, would both serve taxpayer interests and address some of Musk's competitive complaints, though it would also mean that electric vehicles would have to compete with non-EV models on flatter ground.

EV manufacturers aren't the only ones pushing for expanding the tax credits. Utility companies hoping to boost demand for electricity also want to keep the handouts flowing.

Some argue that utility rates would benefit by better using the underutilized capacity during off-peak hours that must be generated to meet peak load demands, especially during summer months. Making use of currently underutilized capacity would allow fixed capital costs to be recovered over a larger volume of electricity sales and thus at lower prices. However, that would require EV owners to charge their vehicles when utilities want. If owners instead charged when arriving home after work, as they often do, it could instead exacerbate peak demand issues.

In either case, the entrance of utilities into the debate over EV handouts is a reminder of how quickly special interests can overwhelm the collective voice of taxpayers and mold the tax code to their benefit. Congress failed to fully utilize the opportunity afforded by last year's tax reform to end the electric vehicle tax credit and other programs that force all taxpayers to subsidize the activities of a tiny few. At a minimum, Congress should avoid compounding that error and resist the call of special interests to expand electric vehicle subsidies.