Veronique de Rugy
|
Posted: Apr 26, 2018 12:01 AM
Share   Tweet
The opinions expressed by columnists are their own and do not necessarily represent the views of Townhall.com. 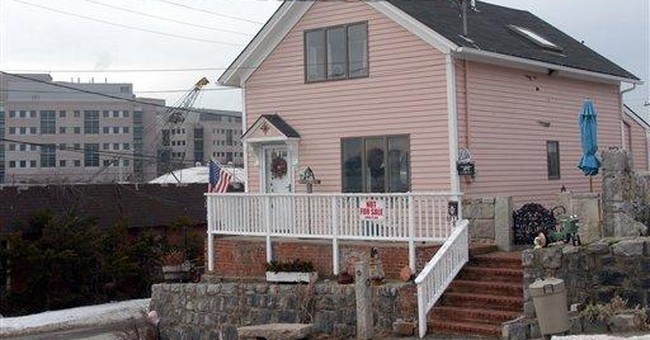 The United States is supposed to be the "land of the free," a country where individualism and private property are sacrosanct. Yet it's difficult to maintain this belief while watching Courtney Moorehead Balaker's newly released movie, "Little Pink House."

The film portrays the real-life story of the determined families who fought to protect their homes in New London, Connecticut, during and after city officials' shameful attempts to evict them starting in 1998. Shockingly, in 2005, it was the Supreme Court that inflicted the ultimate defeat to the homeowners, who lost everything in the process.

Depressing, right? Actually, the movie turns out to be one of defiance and courage in the face of the government's misuse of the Constitution's takings clause (i.e., eminent domain). It's the inspiring story of the pro bono lawyers who represented the victims all the way to the Supreme Court because of their belief in economic freedom.

It's also an important reminder that the fight is never over, even after five justices ruled that it was OK for the government to confiscate private property because it thinks it would be more lucrative in the hands of others. Ultimately, it's a story of those who fight for their rights no matter how small their odds of prevailing are.

This story's main hero is Susette Kelo, the face of the rebellion and owner of the "Little Pink House." She wouldn't sell to the New London Development Corp., a private nonprofit body that wanted to use her land to build a biotech park, complete with a hotel and fancy houses. Note that we aren't talking about government's forcing people to sell their homes to build highways or hospitals. We're talking about a nongovernmental organization's being granted authority to kick people out of their homes in the name of the "public benefit." That's redefined here to mean the proceeds, real or imagined, from the giant pharmaceutical company Pfizer's constructing a global research center. The movie repeatedly treats us to a sleazy NLDC representative touting the 1,000 jobs and potential $1.3 million in annual taxes from the Pfizer investment and equating it to social justice.

The film's other heroes are the lawyers of the Virginia-based Institute for Justice. Throughout the film, they relentlessly expose an unfair system that allows a company to take someone else's property just because it can potentially generate more tax revenues. IJ defends its client before the Supreme Court, but it's clear that it is also fighting for all of us who might similarly lose our homes in the future.

It's fighting for the Motel 6 that could be displaced to build a Ritz-Carlton -- and all of the other small businesses that might stand in the way of something bigger. Though Kelo lost in a 5-4 decision, the plea for economic freedom over the unfair confiscation of private property was heard by millions of concerned Americans. The argument founded a movement that introduced legislation to curtail similar governmental actions in 21 states within a month of the infuriating ruling.

The worst villain in this movie isn't an actual person, but it's still on display throughout the film. It's the disgusting alliance between government and private businesses. Scene after scene pits a politically connected company against Kelo and friends. But these victims were visible and didn't go without a fight. Unfortunately, collateral victims don't often know that they're the victims of crony programs such as this, which protect profits rather than people.

And as if Kelo's losing her home weren't punishing enough, the saga continued after the ruling. Once Pfizer exhausted the subsidies that the city used to attract it to New London, it moved again, to collect subsidies elsewhere -- leaving behind a vacant lot where the Little Pink House once stood.

This cronyism is rampant at all levels of our government. But no matter what form it takes, it always hurts the most vulnerable and least politically connected Americans while propping up the profits of the most powerful and plugged-in companies. "Little Pink House" puts a real face on these victims and those who abused them, and it shows why we must always fight against this injustice.