Tom Foley is a well-known and highly respected business leader with over 25 years experience solving business problems and creating jobs. Tom has experience in government service, but he is not a career politician. As a Washington outsider and expert in business and economics, Tom will bring his private sector expertise and fresh outlook to the challenges facing Connecticut. He will return jobs and economic growth to Connecticut while he ensures that fiscal responsibility, good governance, and trust are returned to Washington.

Tom spent over 25 years as a businessman and entrepreneur using his problem-solving and management skills to turn-around and expand underperforming businesses. He worked for McKinsey & Company as a management consultant and then Citicorp Venture Capital. He started his own business in 1985 when he formed NTC Group to acquire underperforming businesses in textiles, industrial products, and aviation services. As an owner-operator, Tom fixes problems and brings new ideas and new energy to these companies. He knows what it takes to meet a payroll and keep a business healthy so it can grow and provide more and better jobs for workers and their families.

Tom's record in business is impressive. His primary operating companies, The Bibb Company, T.B. Woods, Inc., and Stevens Aviation, each more than doubled in revenues and each expanded employment by more than fifty percent while under Tom's leadership. Tom believes the same expertise and problem-solving skills he uses to manage and grow businesses can be used to help government improve the economy and expand jobs for Connecticut citizens.

Tom has served in government and understands how government works. From October of 2006 until January of this year he was the United States Ambassador to Ireland, for which he was confirmed by the Senate in August, 2006. In 2003 and 2004 he served in Iraq, overseeing most of Iraq's state-owned businesses and developing a plan for turning those businesses around and reviving the private sector economy. Tom earned the Department of Defense Distinguished Public Service Award for his service in Iraq.

The fourth of six children, Tom learned early how to listen. He showed an early interest in tinkering and fixing things and he liked to venture out. Curious about a bigger world than he was experiencing in school, Tom took a year off at seventeen to work and travel around the country. He worked a construction job and then on a can factory assembly line where to get the job he had to join the union. He zigzagged across the country from Boston to Alaska working and meeting people along the way. Tom knows a lot about what makes this country work and the views, problems, and needs of people from all over.

Despite his achievements in business and government service, Tom will tell you that nothing is more important to him than family. Tom's wife, Leslie, lived for four years in New Haven as an undergraduate at Yale. She is an attorney and works in New York City. Tom's son, also named Tom, is eighteen and just graduated from high school. 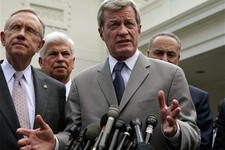