Conservatives Are Peaceful, Law-abiding People But We Must Stand Up to Militant Bullies

Todd Starnes
|
Posted: Jan 24, 2017 11:51 AM
Share   Tweet
The opinions expressed by columnists are their own and do not necessarily represent the views of Townhall.com. 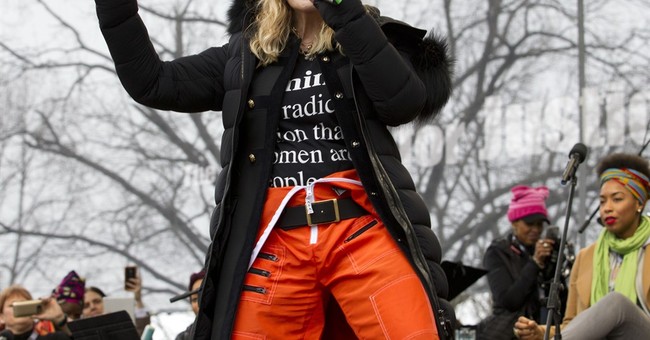 It was the kind of reaction I predicted in my new book, “The Deplorables’ Guide to Making America Great Again.”

Click here to get a limited edition hardcover edition of Todd’s new book.

Rampaging mobs caused mayhem across the fruited plain – but especially in our nation’s capital. In several instances, conservatives were attacked outside Inaugural balls.

Some were left bloodied and battered. Police were pelted with rocks and batteries. Many businesses were vandalized. Car windows were smashed and a limo was set ablaze.

One group of violent thugs spat on and assaulted a Gold Star widow and her sister. They were attacked as they tried to enter the Veterans Inaugural Ball.

It’s all part of an effort to destabilize the nation and delegitimize President Trump’s victory.

The following day scores of self-described “nasty” women, held profane gatherings across the country to protest the new president.

Madonna told a crowd of protesters dressed in pink hats and Birkenstocks that she dreamed of blowing up the White House.

“Yes, I’m angry. Yes I am outraged. Yes, I have thought an awful lot about blowing up the White House. But I know this won’t change anything,” she told a crowd of adoring feminists.

She later walked back the threat.

“What you have is an emerging left-wing fascism,” he told "Fox & Friends." “She’s part of it and I think we have to be prepared to protect ourselves. Frankly, the truth is she ought to be arrested for saying she has thought about blowing up the White House.”

I concur with Speaker Gingrich.

As I wrote in “The Deplorables’ Guide to Making America Great Again,” we are dealing with an alarming number of militant fascists.

Our public universities have been turned into training camps for far-left militants, hell-bent on silencing any speech they disagree with. And as they demonstrated on Inauguration Day, they will use any means necessary to accomplish that task.

We are facing a clear and present danger to our families and the Republic. And as I wrote in my book, we must prepare now to protect ourselves and our loved ones against these violent street thugs.