A Time for Tax Cuts

Terry Paulson
|
Posted: Nov 14, 2017 12:01 AM
Share   Tweet
The opinions expressed by columnists are their own and do not necessarily represent the views of Townhall.com. 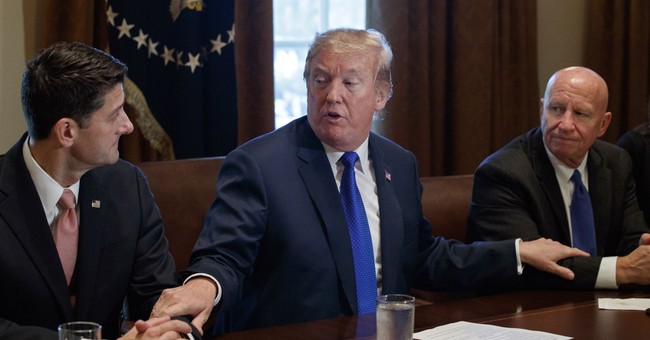 If Congress thought repealing Obamacare was tough, the fight to simplify the income tax code could end up being the fight of the decade. Nothing is more important to maintaining the Washington swamp than special interest exemptions, loopholes, and benefits. Lobbyists and accountants base their value on the ability to influence and/or navigate the complexities of the tax code that impacts us all.

It’s no wonder that the DC suburbs account for seven of the ten richest counties in America. If you want to feed off the government largess, you have to come to the trough to fight for your share! Good lobbyists don’t come cheap.

Democrats have no desire to cut taxes. Their basic premise is that the money received from every tax will do far more good in the hands of government than in the hands of the citizens who earned it. As Thomas Sowell noted, "It never occurs to liberals that compassion may be due to taxpayers. In the media vision, there is no such thing as being mean to taxpayers."

But that has not always been the case. John Kennedy spoke openly about tax relief in his December 14, 1962, speech to the Economic Club of New York, he said: "The best means of strengthening demand is to reduce the burden on private income and the deterrents to private initiative imposed by our tax system; this administration has pledged itself to an across-the-board, top-to-bottom cut in personal and corporate income taxes."

President Kennedy went on to explain: “The purpose of cutting taxes now is not to incur a budget deficit, but to achieve the more prosperous, expanding economy which can bring a budget surplus. … Our practical choice is not between a tax-cut deficit and a budgetary surplus. It is between two kinds of deficits: a chronic deficit of inertia, as the unwanted result of inadequate revenues and a restricted economy, or a temporary deficit of transition, resulting from a tax cut designed to boost the economy, increase tax revenues, and achieve … a budget surplus. The first type of deficit is a sign of waste and weakness; the second reflects an investment in the
future.”

What makes sense does not necessarily ensure making progress. Simplifying the tax code is simple to explain but almost impossible to find the votes to pull off. Special interests on both sides of the political divide are busy fighting for their clients by influencing the powers that be to make their cause a priority. To truly simplify income tax would make most lobbyists and tax preparers all but unnecessary.

Star Parker, arguing to limit the power of special interests, wrote: “The tax code has become an instrument of government power brokers to extract money from private citizens to finance pet schemes of Washington's political class. According to American Enterprise Institute economist and blogger Mark Perry, some 70 percent of the federal budget, about $2.6 trillion, is transfer payments -- funds recycled from one set of private citizens to others. Most of federal government spending is not about paying for functions of government, but for social engineering, meddling in our lives.”

John Adams, one of our Founding Fathers and the second president of the United States, knew the importance of protecting rich and poor alike from the heavy hand of government oppression: “It is agreed that the end of government is the good and ease of the people in the secure enjoyment of their rights without oppression. But it must be remembered that the rich are people as well as the poor, that they have rights as well as others, that they have as clear and as sacred a right to their large property as others have to their’s which is smaller, that oppression to them is as possible and as wicked as to others.”

We finally have a president willing to stand up for the taxpayers who deserve to keep more of what they earn. He wants to cut spending and build a growing economy that creates jobs. If government can confiscate the wealth of a rich person, when will they come to take yours? High taxes don’t just hurt the rich. They hurt Americans working to become rich and lock into government dependence citizens who could take responsibility for achieving their own self-sufficiency. It’s time to make true tax cuts a reality!