Why Did That Pope Have the Highest Favorable Rating? 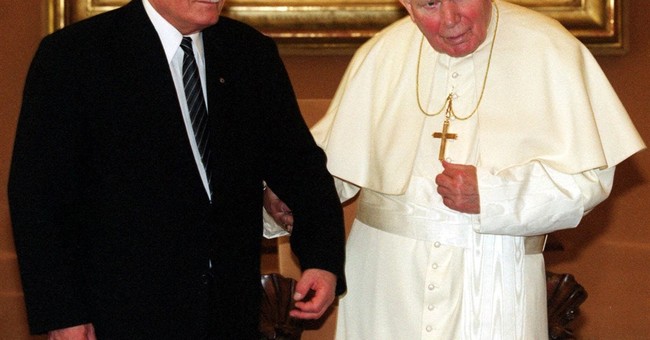 Which of the three most recent popes had the highest "favorable rating" among American adults as measured by the Gallup poll?

Was it the pope who wrote this:

"Therefore, by the authority which Christ conferred upon Peter and his Successors, and in communion with the Bishops of the Catholic Church, I confirm that the direct and voluntary killing of an innocent human being is always gravely immoral. This doctrine, based upon that unwritten law which man, in the light of reason, finds in his own heart, is reaffirmed by Sacred Scripture, transmitted by the Tradition of the Church and taught by the ordinary and universal Magisterium.

"The deliberate decision to deprive an innocent human being of his life is always morally evil and can never be licit either as an end in itself or as a means to a good end. It is in fact a grave act of disobedience to the moral law, and indeed to God himself, the author and guarantor of that law; it contradicts the fundamental virtues of justice and charity. 'Nothing and no one can in any way permit the killing of an innocent human being, whether a fetus or an embryo, an infant or an adult, an old person, or one suffering from an incurable disease, or a person who is dying. Furthermore, no one is permitted to ask for this act of killing, either for himself or herself or for another person entrusted to his or her care, nor can he or she consent to it, either explicitly or implicitly. Nor can any authority legitimately recommend or permit such an action.'"

Or was it the pope who approved this statement:

"The Church's teaching on marriage and on the complementarity of the sexes reiterates a truth that is evident to right reason and recognized as such by all the major cultures of the world. Marriage is not just any relationship between human beings. It was established by the Creator with its own nature, essential properties and purpose. No ideology can erase from the human spirit the certainty that marriage exists solely between a man and a woman, who by mutual personal gift, proper and exclusive to themselves, tend toward the communion of their persons. In this way, they mutually perfect each other, in order to cooperate with God in the procreation and upbringing of new human lives. ...

"There are absolutely no grounds for considering homosexual unions to be in any way similar or even remotely analogous to God's plan for marriage and family. Marriage is holy, while homosexual acts go against the natural moral law. Homosexual acts 'close the sexual act to the gift of life. They do not proceed from a genuine affective and sexual complementarity. Under no circumstances can they be approved.'"

Or was it the pope who issued this exhortation:

"However, the Church reaffirms her practice, which is based upon Sacred Scripture, of not admitting to Eucharistic Communion divorced persons who have remarried. They are unable to be admitted thereto from the fact that their state and condition of life objectively contradict that union of love between Christ and the Church which is signified and effected by the Eucharist. Besides this, there is another special pastoral reason: if these people were admitted to the Eucharist, the faithful would be led into error and confusion regarding the Church's teaching about the indissolubility of marriage."

The correct answer is yes, yes and yes.

The second comes from Consideration Regarding Proposals to Give Legal Recognition to Unions Between Homosexual Persons." The Congregation for the Doctrine of the Faith, then under the leadership of Cardinal Joseph Ratzinger (later Pope Benedict XVI), produced this statement in 2003. Saint John Paul II approved it and ordered its publication.

Gallup last week released the results of its latest survey measuring Pope Francis' "favorable rating" among American adults. If a pope's favorable rating is indeed a measure of something important, Gallup's survey was good news. Pope Francis' rose from 59 percent in July to 70 percent following his recent visit to the United States.

But then Gallup said this: "Pope John Paul II, however, was the most popular among the three most recent popes, with favorable ratings that ranged from a low of 61 percent in 2002, after the Catholic priest sex abuse scandal broke, to a high of 86 percent in 1998."

But does a pope's favorable rating ultimately matter? His job is not to win higher polling numbers, it is to win souls for heaven.

On this earth, John Paul II's legacy will not to be found in old polls, but it will ring through the years in timeless words that speak the truth with force and clarity.