A Challenge to Get to Mars and Back 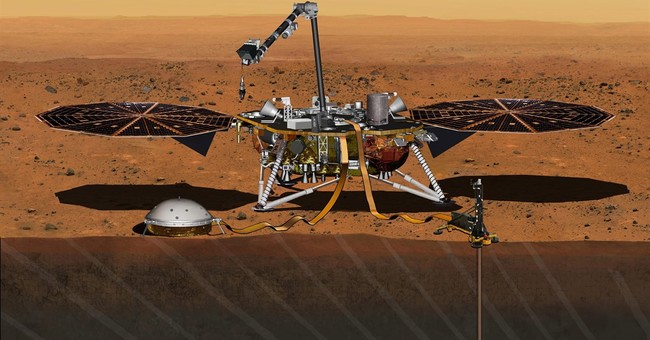 Measure it any way you like, but this hasn't been that championship season of the "can do" spirit of America. Most of the presidential campaigners spend their allotted minutes criticizing what's wrong with the country, how others have made a mess of things and why voters should put them in charge of changing things.

It's difficult to find the formula through the haze of confusion and fog of rhetoric. There's far more blowhard nastiness than creative eloquence. That's what politics is about, of course, but it gets tiresome in the holiday season when we're craving inspiration from our better angels, if any have survived.

If you crave a reprieve, if only for two hours (considerably shorter than a presidential primary debate), dip into pop culture and see "The Martian," a technologically hip, feel-good movie about what the American spirit can accomplish, if only in a sci-fi movie. "The Martian," set in the not-so-far future, is about leaving a man on Mars and getting him back.

The movie, as you may have heard if you're in earshot of a sci-fi loving teenager (or adult), is about an astronaut, Mark Watney, portrayed by Matt Damon, who has been abandoned on the red planet by his crew. They thought he was dead. The story was lifted from a novel by Andy Weir, which is admired for its authentic scientific detail and mathematical accuracy. Its theme is rooted in challenges to the human spirit and the collective ability of man to find technological solutions to human problems. Life is not easy for a man alone on the red planet.

The spaceship crew, on learning from NASA that their abandoned astronaut is alive and well, are steeped in the tradition of believing that they all owe each other and that it's necessary to cover a mate's back. They desperately want to find a way to go back for him. They're supported by a multicultural network of brilliant young nerds, techies and whizzes at mission control. They don't know whether they can work fast enough to get the space cowboy before he's overtaken by unforgiving forces. But they're sure going to give it the old college try. This is nerd-cool at its best.

The movie has been described as "Robinson Crusoe" in space, or "Ulysses" on Mars and at times the planet Mars looks like Monument Valley, where John Ford spun so many of his classic Westerns. But the temper and tone of the story are more reminiscent of America galvanized by Pearl Harbor, when talented young men and women from every nook and cranny of America got together in factory and field to do what needed to be done to support the soldiers.

On Mars the focus is on one man, but between his resourcefulness and a high-tech team's problem-solving abilities, their science and math are the required backup for the derring-do.

Mark Watney, the lone astronaut on Mars, is a botanist, from a profession that has never before had such an opportunity for heroism. He understands his predicament, and stares into the camera for his video diary and tells himself with more than a touch of warrior bravado: "Mars will come to fear my botany powers."

NASA actually announced that scientists found liquid water on Mars just as the movie opened, but the botanist has to make his own water, drawing on H2O, the formula we memorized in science class. If not exactly Mendel with his peas, he figures out through mathematical calculations how to grow enough potatoes to keep himself alive.

"The Martian" could motivate a generation of young people to see the value of studying math and science. We remain woefully behind in international tests in science and math, with our 15-year-olds scoring 35th out of 64 countries in math and 27th in science, according to the Program for International Student Assessment.

It's probably a coincidence, but just when "The Martian" was arriving at a theater near you, NASA offered "NASA's Journey to Mars: Pioneering Next Steps in Space Exploration," which actually outlines a strategy for landing human "spacefarers" on Mars and bringing them home. It's an ambitious plan to propel a spaceship into the 141-million-mile journey from Earth. (You may never complain about a 5-mile commute again.)

While the candidates debate boots on the ground and taxes in the stratosphere, NASA yearns for boots on the surface of Mars. "We are developing the capabilities necessary to get there, land there, and live there," says NASA. John F. Kennedy rallied the nation with a call for man to go to the moon and back, requiring the dedication and disciplined work of an "entire nation." But can we answer such a call again?