'First They Came for the Jews' 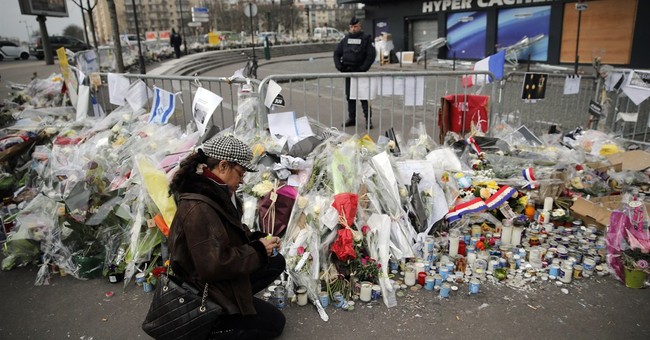 A widely distributed political cartoon by Ranan Lurie, published after the massacre of four Jews in a kosher supermarket in Paris, depicts a tiny shrub above ground, and just below the surface, supporting the plant, is a web of thick twisted roots spread in the design of the swastika.

These Nazi roots are more than a cartoonist's imagination, carefully tended by the anti-Semites of France, exposed when the French rounded up their Jews, men, women and children, and shipped them to the death camps of World War II. If the cartoonist had dug deeper, he could have drawn the roots supported by older tentacles of anti-Semitism, surviving from a crime that defined French prejudices long before the two world wars. Alfred Dreyfus was a thoroughly assimilated Jew, a captain in an elite regiment of the French Army who was falsely convicted of treason in 1894, almost solely simply because he was a Jew.

When the writer Emil Zola rose to the defense of Dreyfus in a newspaper article famously titled, "J'accuse," the newspaper sold 200,000 copies in a day. "J'accuse" was the literary equivalent of "Je suis Charlie." Zola had to flee the country, and many years passed before the innocence of Dreyfus was unequivocally established.

Anti-Semitism runs deep in France, and it's no coincidence that the Dreyfus case and the controversy inspired the founding document of Zionism, "The Jewish State," by Theodor Herzl, a reporter who covered the trial for a Viennese newspaper. Herzl, like Dreyfus, was a cultured and assimilated Jew, but he was persuaded that there was no room left for the Jews of Europe, however assimilated. He heard the chants in the streets of Paris after the trial, crying "Death to the Jews!" Herzl concluded that the only way for Jews to feel safe in the world was to live in a state they could call their own. The Holocaust would give further evidence.

Many Jews in France are coming anew to Theodore Herzl's conclusion, that they will feel safe only in Israel. Nearly 7,000 of them left for Israel before the recent murders, and another 10,000 are expected to leave before the end of this year. A new poll suggests that 74 percent of French Jews are considering leaving; Israel is the most likely destination.

Israeli Prime Minister Benjamin Netanyahu, in Paris to join the unity march after the massacres, invited French Jews to Israel. "Israel," he said, "is your home."

French Prime Minister Manuel Valls disagreed, counting what France would lose. "Without its Jews, France would not be France," he said, and acknowledged that "anti-Zionism" is only a cover for anti-Semitism. France, he said, has a problem with both.

Germany counted a similar exodus in the years after Hitler imposed the Third Reich. Much of its cultural life was drained away. The catalogue of accomplished writers, artists, critics, composers, movie directors and scientists who fled to America in the 1930s is a revealing record of what Europe lost when these Jews went into exile. Albert Einstein was only the most famous of them. A new study by Stanford University found that U.S. patents increased by 31 percent in fields common to Jewish scientists who fled Nazi Germany. This had a rippling effect, attracting researchers to America for generations afterwards.

The Islamists, like the Nazis and the exploiters of Dreyfus before them, do not necessarily target specific Jews or Israelis, but project their hatreds onto the race.

A Jew by their perverted lights becomes a nasty metaphor for everything they hate. The radical Muslims refer to Egyptian Prime Minister Anwar Sadat as "a Jew," which he certainly is not, after he joined Prime Minister Menachem Begin in Israel for a search for peace that in 1978 earned both men the Nobel Peace Prize. As long ago as the eighth century, Sunnis denounced Shiites as "Jews in their midst," the evil lurking in all the "others."

The French government has promised to guard their Jews at synagogues, schools and "sensitive sites," but it's not at all clear that this, both well-meaning and welcome, will sustain the collective spirit that spread through Europe when millions of men and women marched across Paris and other cities to protest the Islamist terror. Orchestrated marches in reaction to tragedy can't sustain that spirit.

If Jews continue to leave France, emptying the country of a strong element of its character, it would, in the words of Claude Lanzmann, the French filmmaker of the Holocaust documentary "Shoah," award Hitler and his Nazis a "posthumous victory." Can that be possible seven decades after the world thought it had eradicated that vicious evil? The world is watching.