Marriage and the Constitution in Alabama 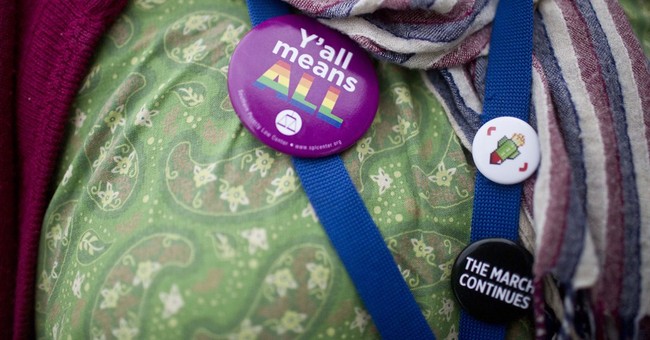 Trending
Alabama Chief Justice Roy Moore has a unique legal mind. He could say, like Lewis Carroll's Cheshire Cat, "I'm not strange, weird, off, nor crazy, my reality is just different from yours."

Moore, whose reality comes out of a musty corner of the distant past, once made news by erecting a two-and-a-half-ton granite monument inscribed with the Ten Commandments in the state judicial center. A federal appeals court ruled that it violated the First Amendment ban on government sponsorship of religion. It also ordered him to remove it despite his belief that he was not answerable to the federal courts.

"The rule of law does require that every person obey judicial orders when all available means of appealing them have been exhausted," the court said then. "The chief justice of a state supreme court, of all people, should be expected to abide by that principle." A state tribunal eventually deprived him of the chief justice job for violating his legal obligations.

He apparently is ready to repeat the experience. When a U.S. district court struck down Alabama's law withholding marriage from same-sex couples, he once again asserted the power to disregard the federal judiciary. Moore is sure to lose, because he has no such power, and because his interpretation of the Constitution is a hopeless anachronism.

Those who oppose laws against same-sex marriage compare them to the bans on interracial marriage that many states once had. Some legal thinkers cite the 1967 Supreme Court decision overturning such laws to argue for the right of gays to wed. Moore, however, thinks that decision actually justifies the ban.

In his letter to state probate judges forbidding them from issuing marriage licenses to gay couples -- as mandated by a federal court -- Moore quoted the 1967 decision, which said "the freedom to marry has long been recognized as one of the vital personal rights essential to the orderly pursuit of happiness by free men and women." He then declared, "No court or other human authority should pretend to redefine that right."

That is just one of the many bizarre features of his judicial mutiny. He claims the federal courts are engaged in an "unlawful intrusion" into Alabama's sovereignty. But the power of federal courts to enforce constitutional rights over the opposition of state officials has long been affirmed through the duly established processes of our legal system.

Moore takes refuge in bald literalism. "The United States Constitution contains neither the word 'family' nor the word 'marriage,'" he argues. "The power to redefine the fundamental institutions of society is not enumerated in any of the provisions of Article I, Section 8."

It would not be quite accurate to say that ship has sailed. An entire fleet has steamed over the horizon. The federal government drastically redefined the "fundamental institutions" of Southern society when it dismantled white supremacy. The effects of same-sex marriage are not nearly so far-reaching.

Despite the absence of the word "marriage," Moore hastens to add that the Constitution does protect the right to marry. "Although not enumerated in the Constitution, that right is retained by the people under the Ninth Amendment," he says.

Maybe so. But those who say the Ninth Amendment protects rights that are not spelled out can hardly argue that the Fourteenth Amendment -- which guarantees equal protection of the laws -- must be silent on same-sex marriage. The principles enshrined in our founding charter were put there to resolve not only the controversies the authors faced and foresaw, but those that would emerge long after they were dead.

The Constitution's meaning is subject to endless debate, but the task of authoritative interpretation is one that ultimately falls to the federal courts. Moore and others may not like the version that has emerged from centuries of jurisprudence, which is so much different from what it was in 1789 or 1861 or 1963. But it's the only Constitution we have.