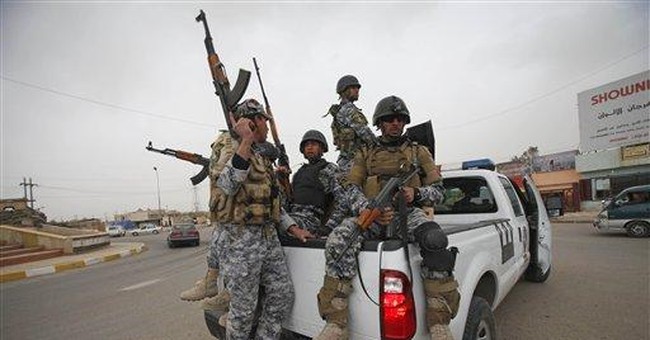 A sound, if cynical, policy for elections is to never vote for a candidate whose policies match your own. Since politicians often renege on their promises, you are better off voting for a candidate who says he'll do the opposite of what you want -- and trusting that he's a liar.

George H.W. Bush, after all, gave an emphatic promise not to raise taxes and then raised taxes. Bill Clinton vowed to crack down on China's human rights abuses and didn't. George W. Bush championed a humble foreign policy.

Barack Obama opposed the war in Iraq from the outset, promised to bring our troops home in short order and criticized John McCain for his "stubborn refusal to end this misguided war." Without his stance against the war, he would not have won the Democratic nomination and he would not have won the election. But the meaning of his speech Friday at Camp Lejeune is that we shouldn't have believed him.

During the campaign, Obama pushed a plan to withdraw one or two combat brigades per month until they were all out. Only two things have changed in Obama's 16-month departure plan: It will take longer than 16 months, and we won't depart.

Instead of May 2010, the target date has been pushed back to August of that year. Nor will he bring back one or two combat brigades each month. Instead, The New York Times reports, Obama plans to withdraw only two between now and December, or one combat brigade every five months.

The administration claims it will speed up the pace of withdrawal next year. But if someone says he's going to sober up tomorrow, it doesn't mean he will definitely do it tomorrow. It just means he definitely won't do it today.

What we can deduce from the new timetable is that for now, we are staying put. As for what happens next year -- well, why cross that bridge before we come to it?

Assuming the president adheres to this backloaded schedule, a large U.S. force will remain for some time. After August 2010, the administration plans to keep as many as 50,000 troops in Iraq. That's 16,000 more than we currently have to fight the war in Afghanistan. We'll also be spending $50 billion on the effort in 2011.

Oh, and remember that promise to remove all the combat brigades? Here's the trick to it: leaving some of them there but under a different designation. They would be referred to as "Advisory Training Brigades" or "Advisory Assistance Brigades," says The New York Times.

The president says we will be entirely out by 2012, as required in our status of forces agreement with the Iraqi government. Maybe so, but given how much Obama has yielded on his original plan, it's chancy to assume he'll stick to this one.

Though the American people voted for a different policy, the president is reluctant to take the risk of something unpleasant happening if we actually leave Iraq. That inclination, says Massachusetts Institute of Technology defense scholar Barry Posen, raises a question: "What's the difference between him and Bush on this?"

Bush, you may recall, promised that the surge he began in 2007 would "hasten the day our troops begin coming home." Yet we somehow have more troops in Iraq today than we had then.

Obama could conclude that since there is a high risk of failure even if we leave later, we might as well leave earlier -- which essentially was his campaign position. But he has moved a long way toward Bush's view that we cannot leave until some sort of victory or success has been achieved.

What he doesn't tell us is what he will do if that day fails to come, or if things get worse. But we can figure it out.

In Thomas Ricks' new book, "The Gamble: General David Petraeus and the American Military Adventure in Iraq, 2006-2008," the author asks an officer who advised Petraeus on the surge how our military involvement in Iraq will finally end. His answer: "I don't think it does end."