How We Can Start Taking Back Our Country

Star Parker
|
Posted: Jun 21, 2017 12:01 AM
Share   Tweet
The opinions expressed by columnists are their own and do not necessarily represent the views of Townhall.com. 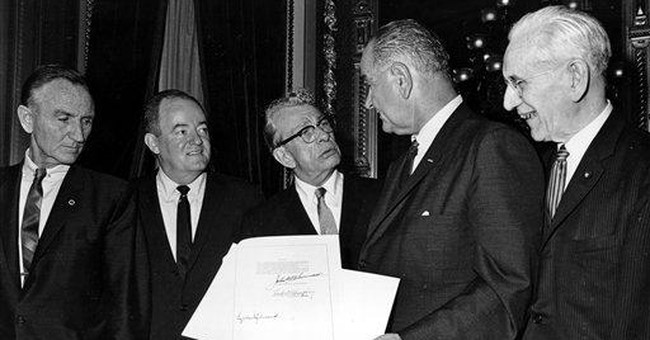 Americans are justifiably frustrated regarding what is going on in Washington, D.C.

But let's not forget that we elect these folks. We may have a mess, but we can at least be proud that it's our mess.

There is one unique problem. Unlike business, where change can be made quickly, government programs are so hard to change that it is almost a one-way street. It's not so easy to pass new programs, but once they're passed, we're stuck with them, generally, forever.

Sure, technically they can be changed. But when is the last time we saw a major government program scrapped or fundamentally altered? All our major spending programs, all our entitlements, have been with us for at least half a century.

The problem is not just runaway federal spending and debt. It is that so much of that spending is ineffective and inefficient.

According to the House of Representatives Budget Committee, we spent $799 billion in 2012 on 92 different anti-poverty programs -- one-fifth of the federal budget.

The issue is not just the spending, but its efficacy.

The legacy of all this goes back to President Johnson's declaration in his 1964 State of the Union address of "an unconditional war on poverty."

Johnson said then that the goal of this federal initiative was not just to help those that are in poverty but to "cure it and above all, prevent it."

In that speech, Johnson itemized 13 areas that he wanted address. That legacy has ballooned into these 92 programs we have today.

It's not so easy to measure exactly how much has been spent total since 1965, but estimates are as high as $22 trillion. And how does this measure up to Johnson's goal of curing and preventing poverty?

Clearly, it has barely been dented. Yet what is the chance of a major overhaul of all this? I think it is fair to say miniscule.

Let's contrast this with the private sector.

In 1997, Steve Jobs had returned to the company he founded, Apple Inc., as its CEO.

The company was hemorrhaging and estimates were that it was 90 days from bankruptcy.

Jobs assessed the situation, eliminated 70 percent of the company product line, whittling it down to just four products, and eliminated 3,000 jobs.

By the end of that year, Apple lost a billion dollars. By the next year, it turned a $300 million profit and Jobs proceeded to build the most valuable company in the world.

If our 92 different anti-poverty programs, costing $799 billion per year, made up one business with a CEO, there is no doubt there would be a major overhaul.

It seems we are institutionally locked into failure and possibly bankruptcy.

Is there anything we can do?

I have one proposal. Let private citizens at least compete with the government monopoly they themselves have created.

I propose allowing dollar-for-dollar charity tax credits. The nation has magnificent private charities dealing with the problems of the poor. Charities such as Feeding America, Salvation Army, Food for the Poor, Catholic Charities USA, World Vision and many more.

With more resources, they could do much more and innovate.

Dollar-for-dollar tax credits, where individuals would simply subtract their charitable contributions from their federal tax liability, would suck the oxygen out of a wasteful federal government and direct dollars in a productive and useful way to achieve the objectives that these federal programs supposedly exist to address.

Dollar-for-dollar tax credits could be exactly the platform Americans need to take back their country and solve its problems.

I'll be exploring this idea and five other initiatives in an upcoming book on how to fix America's inner cities.