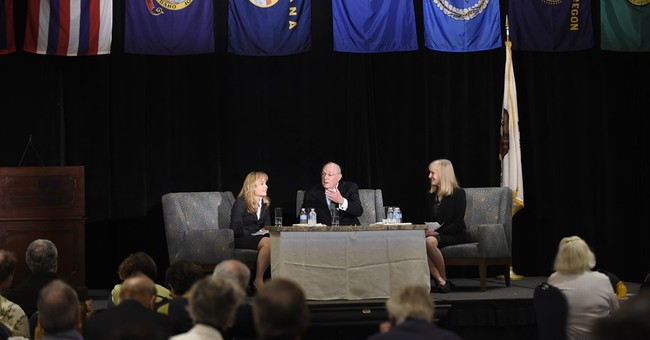 Trending
We're in a world today increasingly defined by chaos. At home it's on our college campuses. Abroad it's spreading across the Middle East and spilling over into Europe.

Who do we have to thank for it all? Liberals and moral relativists in power in our country and Europe.

Liberals have led the way to destroy all sense of moral clarity in our nation, all objective sense of right and wrong and all sense of authority.

What's the common ground of these distant and seemingly totally disconnected worlds -- American college campuses and a chaotic Islamic Middle East? In both places, those who claim to have all the answers are the very ones who should be humbly asking questions and seeking knowledge.

The students causing problems do not arrive on campus to seek knowledge. They arrive already knowing it all, looking to instruct professors rather than to learn from them. And the weak-kneed liberal faculties and administrators at universities agree!

Today's upside-down world can be directly traced to the purge of the values and principles of our country's Judeo-Christian heritage. Milestones of this process are the purge of school prayer in 1962, legalization of abortion-on-demand in 1973 and redefinition of marriage by the U.S. Supreme Court in 2015.

Once the Bible goes out the window, reality gets invented by politicians.

Ironically, the tradition of higher learning in America is rooted in the church.

Look at the website of Yale, where there is student unrest, and discover the clerical roots of the university.

Yale University "traces its roots to the 1640s when colonial clergymen led an effort to establish a local college to preserve the tradition of European liberal education in the New World. This vision was fulfilled in 1701, when a charter was granted for the school 'wherein Youth may be instructed in the Arts and Sciences (and) through the blessing of Almighty God may be fitted for Public employment both in Church and Civil State.'"

Regarding campus unrest tied to allegations of racism, we have the same problem. Despite the fact that the civil rights movement succeeded because of its Christian roots and Christian leadership, today, thanks to liberals, it is all about politics.

It is no secret that slavery and racism are shameful blots on America's history. But Judeo-Christian values are not about claiming the world is perfect. They are about transmitting the right values, principles and tools to individuals to take personal responsibility to perfect this broken world. This is in contrast to liberals, who invent their own illusions about the world and blame everyone else for their problems.

What about the Middle East?

The world of Islam is horribly broken. By some estimates illiteracy rates average 40 percent. As I wrote a few weeks ago, of 31 nations with populations more than 90 percent Muslim, two are free by the measurement of Freedom House in Washington, D.C.

Instead of this broken Islamic world hearing from the West that they need to fix themselves, they hear from President Obama that our values are "tolerance and diversity and equality" and that the problem is a handful of terrorists and not the world of Islam itself.

Look no further than liberals holding positions of leadership in the West to understand why we live in an increasingly chaotic and dangerous world. If we want to fix the world, we must fix ourselves and restore the kind of values and leadership we need.