Barney Frank and the politics of family values 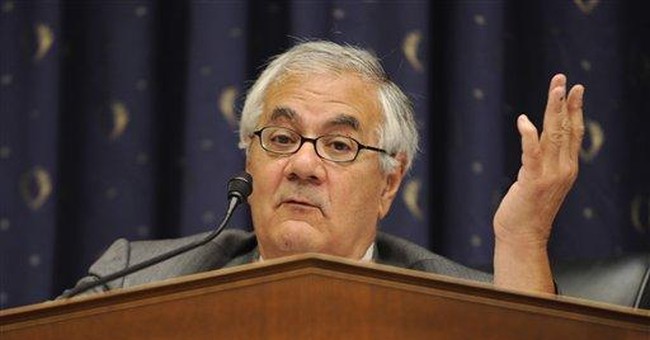 Barney Frank isn't just another liberal. And he is much more than just an openly gay congressman. He is a powerful legislator who happens to be chairman of the House Financial Services Committee.

This makes Frank a central and influential player in government's response to the current mortgage crisis that has rocked our financial markets. The decisions that Frank, a Democrat, makes can put taxpayers on the hook for not just billions, but trillions of dollars. These are decisions that effect our pocketbooks but also our freedom. They influence the size and scope of government in the lives of every American citizen.

So, yes, I care a lot about what Barney Frank thinks, and how he thinks, on any subject that I know matters to him.

It's why I paid particular attention when Frank decided to join the liberal chorus attacking conservatives on the issue of John McCain's selection of Gov. Sarah Palin as his running mate.

In an op-ed in his hometown paper, the Boston Globe, Frank portrays conservatives as small-minded and intolerant folk who are willing to hypocritically look the other way, and forgive where they normally would not forgive, in order to get one of their own into a position of power.

With regard to Palin's sister's divorce, and the pregnancy of her teenage daughter, "people of the right," according to Frank, "seek to impose strict standards on others, and blame them for falling short, while making exceptions for those close to them."

This, in contrast to liberals, who for Frank are honest about and realistic in addressing life's many challenges, and ready to forgive, at the drop of a hat, those who stray off the path.

In Frank's mind, liberalism is tantamount to respect and compassion. And conservatism amounts to intolerance and self-righteousness.

My guess is that Crystal Dixon, who I wrote about earlier this year, doesn't quite see the world as Barney Frank does.

Dixon, a black Christian woman, wrote an op-ed that was published in the Toledo Free Press, as a counter point to a pro-gay opinion column that had appeared in the paper. She challenged that column and expressed her sense, as a Christian, that homosexual behavior is unacceptable. She also challenged the premise equating unwillingness to accept homosexuality to racial discrimination ("I cannot wake up tomorrow morning and not be a black woman").

Dixon was fired from the administrative position she held at the University of Toledo for writing this column and expressing her views.

I'm not holding my breath waiting for Barney Frank to write an outraged column about the abrogation of Crystal Dixon's freedom. I'm not expecting much respect and compassion from the congressman for a woman who lost her job because she is a Christian and tired of sitting by quietly and passively as others force their counter-world view on her.

Barney Frank calls James Dobson "one of the leading advocates for imposing moral choices on the rest of us."

Frank introduced last year the Employment Non-Discrimination Act of 2007 making it a federal crime for an employer to deny employment to an individual because of their sexual orientation.

Dobson talks on the radio. Frank, a congressman, wields major political power and wants to pass legislation imposing his sense of right and wrong on every employer in America, and yet he sees Dobson as the threat to freedom.

As the many Americans who quietly go to church and unobtrusively raise their families have sat by quietly and passively over the years, left-wing activists such as Frank have hijacked our nation and our culture. Now that those who care about traditional values respond, they are called intolerant.

Initiatives to constitutionally define marriage as between a man and a woman have not come out of the blue. They are in response to left-wing inspired judicial activism that, if ignored, would result in homosexual marriage becoming a formal and legal reality in America.

Of course, conservatives are thrilled by the candidacy of Sarah Palin.

And, of course, Christians understand that to err is to be human. Forgiveness is a pillar of our faith.

We even forgive Barney Frank. Our only intolerance is toward his campaign to tear down the traditional values foundation of our country and replace them with his culture of nihilism.

For All of His TV Appearances, National Security Advisor Jake Sullivan Reassures Nobody on China
Rebecca Downs
Study Finds Republicans Fare Better Than Democrats on Citizenship Test, But Most Eligible Voters Fail
Rebecca Downs
The Biden Administration Has a Transgender Agenda