Seton Motley
|
Posted: Aug 25, 2016 12:01 AM
Share   Tweet
The opinions expressed by columnists are their own and do not necessarily represent the views of Townhall.com. 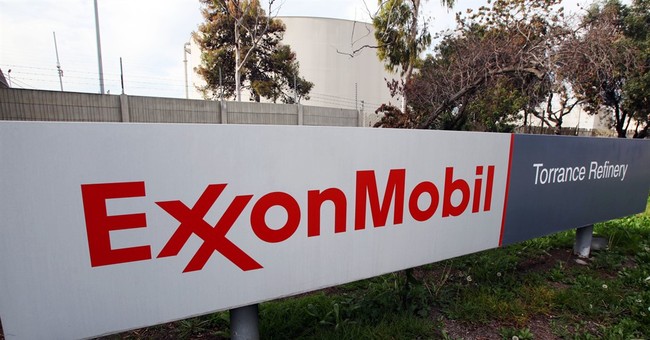 In the Tom Cruise-starring science-fiction-future-flick “Minority Report”: “A special police unit is able to arrest murderers before they commit their crimes.” These were called “Pre-Crimes.”

Objection, Your Honor: Assuming facts not yet in evidence.

But Democrats aren’t letting that stop them. Donkeys and Hollywood have for decades been hyper-intertwined. And the Donkeys are now taking this harmonic convergence more than a mite too far.

To wit: We have the nigh endless Democrat persecution of petroleum company Exxon Mobil; which began as an assault on the First Amendment.

Democratic Attorneys General to Police Climate Change Dissent: “A coalition of Democratic attorneys general…announced Tuesday an unprecedented campaign to pursue companies that challenge the catastrophic climate change narrative, raising concerns over free speech and the use of state authority to punish political foes.

“Standing beside former Vice President Al Gore, New York Attorney General Eric Schneiderman said the state officials are committed to ‘working together on key climate-related initiatives,’ including queries into whether fossil fuel companies like ExxonMobil have committed fraud by deceiving the public and shareholders about the impact of man-made carbon dioxide emissions.”

Ah, the global warming - oops, I mean climate change myth. Lost not is the irony of myth pushers haranguing Exxon for pushing a myth - actually, for pushing back against their myth.

An activity, which, our Constitution guarantees Exxon (and all of us) has the right to do - completely free from any government entity or official doing anything about it.

But Democrats haven’t let that stop them.

Senate Democrats Slam Exxon, Fossil Fuel Industry on Climate Change Denial: “A group of 19 Democrats took the Senate floor yesterday to call for an end to the fossil fuel industry’s ‘web of denial’ on climate change, particularly singling out Exxon Mobil for criticism.

“A resolution introduced by Sen. Whitehouse claimed that fossil fuel companies had used a ‘misinformation campaign to mislead the public and cast doubt in order to protect their financial interest,’ and attracted support from the likes of Senate Minority Leader Reid and Sen. Schumer.”

How very censorious of all of them.

These dozens-of-Democrat attempts to circumvent the guaranteed right to speak freely - have gone absolutely nowhere. (Save for the millions of dollars Exxon has had to waste fending off these frauds.)

So these Democrat paragons of virtue - have now turned to trying to prosecute Hollywood Pre-Crimes.

Exxon Mobil Fraud Inquiry Said to Focus More on Future Than Past: “For more than a year, much of the public scrutiny of Exxon Mobil was captured by the #ExxonKnew hashtag - shorthand for revelations about decades-old research on climate change conducted by the company while it funded groups promoting doubt about climate science.

“(I)n an extensive interview, Mr. Schneiderman said that his investigation was focused less on the distant past than on relatively recent statements by Exxon Mobil related to climate change and what it means for the company’s future.

“In other words, the question for Mr. Schneiderman is less what Exxon knew, and more what it predicts.”

“Within a few years it is predicted that due to the ice melt the sea will rise and make most coastal cities uninhabitable.” (From an Associated Press report published in The Washington Post - on Nov. 2, 1922.)…

“On July 5, 1989, Noel Brown, then the director of the New York office of the United Nations Environment Program, warned of a ’10-year window of opportunity to solve’ global warming or ‘entire nations could be wiped off the face of Earth by rising sea levels if the global-warming trend is not reversed by the year 2000.’”

The climate change freaks - not so much with the predictions. Whether they’re predicting warming - or cooling.

“‘If present trends continue, the world will be about four degrees colder for the global mean temperature in 1990, but 11 degrees colder by the year 2000,’ claimed ecology professor Kenneth E.F. Watt at the University of California in 1970. ‘This is about twice what it would take to put us in an ice age.’…

“In 1971, another global-cooling alarmist, Stanford University professor Paul Ehrlich, who is perhaps best known for his 1968 book The Population Bomb, made similarly wild forecasts for the end of the millennium in a speech at the British Institute for Biology. “By the year 2000 the United Kingdom will be simply a small group of impoverished islands, inhabited by some 70 million hungry people,” he claimed. “If I were a gambler, I would take even money that England will not exist in the year 2000….’”

Democrats have spent more than a year - and millions of dollars of money taxed away from us - persecuting Exxon Mobil for engaging in free speech.

That having failed, these Asses have now turned to real life imposition of Tinsel Town Pre-Crimes - persecution for making predictions.

All in defense of a climate change myth - rife with decades and decades of horrendously erroneous predictions.

Hollywood would never green light this mess. Because of no amount of suspension-of-disbelief is sufficient to pretend to make it plausible.