After DC’s Snowmageddon - Some Things Should Stay Buried

Seton Motley
|
Posted: Jan 26, 2016 12:12 PM
Share   Tweet
The opinions expressed by columnists are their own and do not necessarily represent the views of Townhall.com. 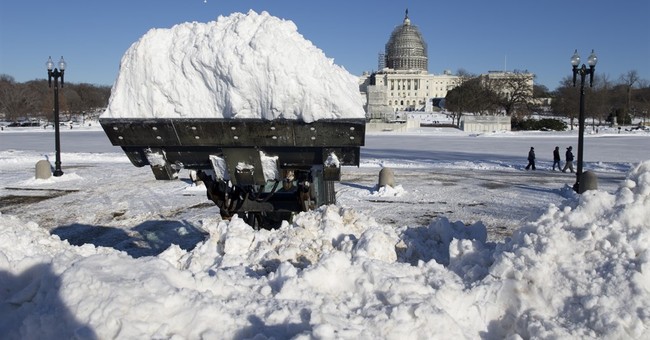 Due to this weekend’s torrential winter downpour, we are currently in the midst of a federal government shutdown. Uh oh. We’ve been told so often by so many that a government shutdown will shake the Earth from its orbital path and send us careening into the Sun. So far, thankfully, that has not occurred.

Despite our promised fiery demise, we have begun to excavate DC (…wait a moment, what’s the rush?). DC is doing what anyone does in such situations. You triage - you prioritize what gets attention in what order.

Among the myriad latter are two bills currently under consideration: The House’s Innovation Act and the Senate’s PATENT Act. Bills that - no matter the expressed intent - will fundamentally undermine the ability of people with ideas to protect their ideas with patents.

Sadly, in a Republican-controlled Congress there are Republicans pushing these bills. They do so in the alleged name of “tort reform” - to attack and undermine “patent trolls.” When you rightly oppose their attempts to fundamentally transform how we handle intellectual property you are accused of being on the side of the trial lawyers and their disruptive “patent troll” clients.

In our information economy - where computers rule and nigh everything is digital - less and less is tangible. But just because you can’t touch it - doesn’t mean it isn’t property. Stealing a compact disc from Tower Records was wrong. Downloading without paying for an MP3 is wrong. New technologies, same principles. To oppose these bills is to be on the side of all things private property.

In opposing these bills, you are also on the side of people crucial to any successful economy: the creators. The people who have the ideas that make everything else possible. No matter the format - vinyl records, eight-tracks, cassette tapes, CDs or MP3s - the ideas pressed thereon are what matter.

When you steal a Beyonce album, you don’t just steal from Beyonce. You steal from the companies that invest a lot of money in Beyonce and a whole lot of other Creators who aren’t (yet?) profitable. If the investors’ investments aren’t protected by law they can’t get a return on their investments. So they’ll stop investing.

And when they stop investing we’ll stop getting new ideas. No new ideas, no more products, no goods, no services. Our entire economy will grind to a halt.

It isn’t your fault that the Innovation and PATENT Acts are drafted so broadly and badly - they place you on the same side as trial lawyers. (Though for every terrible trial lawyer - there is a trial lawyer on the other side of the courtroom fending off his cohort with a whip and a chair. They ain’t all bad.)

And “patent trolls” is anti-property-activist-speak - for people suing to protect their patents. And filing lawsuits against the very many thieves is just about the only way to protect patents.

These bills throw out not just the baby with the bathwater, but the entire nursery. New ideas, new creations, and new products are smothered in the crib perversely, all in the name of protecting innovation.

Currently, the Innovation and PATENT Acts are buried in respective congressional committees. Like much of DC they should stay buried.