Scott Rasmussen
|
Posted: Feb 08, 2018 12:01 AM
Share   Tweet
The opinions expressed by columnists are their own and do not necessarily represent the views of Townhall.com. 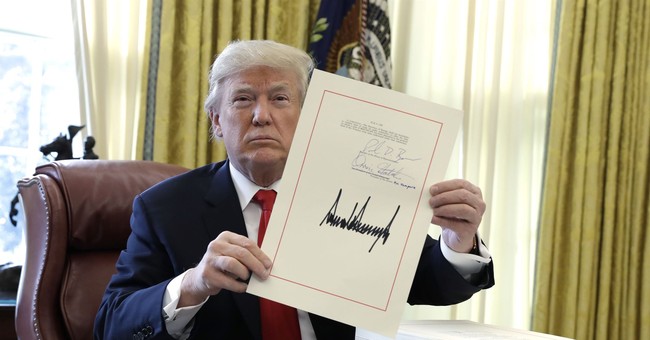 Republicans are understandably nervous about the parallels between the 2010 midterm elections that brought them to power and the 2018 midterms where Democrats envision a return to power.

Eight years ago, a polarizing new president was facing his first midterm election. Progressives and conservatives offered wildly different interpretations of his every word. Despite polls showing his major legislative dream was unpopular, that president relentlessly pursued it. His efforts inspired a resistance known as the Tea Party.

On top of that, unnerving interim elections rattled the president's party. A Republican won the Governorship in New Jersey, which was about as unusual as a Democrat winning a 2017 Senate race in Alabama. And, of course, there was the real shock of Scott Brown's upset victory in Massachusetts. If a Republican could win Ted Kennedy's old seat in a wave year, it's certainly easy to imagine Democrats winning 2018 Senate races in states like Missouri, Indiana and West Virginia.

Adding to Republican nightmares, the general trend goes back a lot further. Presidents Bill Clinton, George W. Bush and Barack Obama all came into power with their party in control of the White House. All three lost Congress during their tenure. Never before in American history have we witnessed such a three-peat. Voters have fundamentally rejected both political parties and are constantly in a mood to throw the bums out.

As we head into the 2018 midterms, there is a reasonable chance that President Trump could become the fourth straight president to lose control of Congress. To win a majority in the House, Democrats need to gain 24 seats. In four of the last ten midterm elections, the party out of power has picked up more than 24 seats and the political environment currently seems strong for the Democrats. It's easy to identify where the Democrats could make their gains. At ScottRasmussen.com, we currently rate 45 House races as potentially competitive. Thirty-eight of them are currently held by Republicans.

After it passed, Obamacare never gained ground in the court of public opinion. There were no short-term benefits for voters but many unpleasant surprises. Millions were unable to keep their doctor, buying insurance didn't mean you could find a doctor who would take it, and the prices went up rather than down. Over time, the reality of Obamacare proved to be such a drag on Democrats that Republicans now hold more political power than at any point since the 1920s.

In contrast, the tax cut has already seen a big jump in public approval because the results have pleasantly surprised voters. When the bill was being debated, nearly half expected their own taxes would go up. Now, 90 percent are finding more money in their paychecks because their taxes have gone down. Not only that, millions of voters have received cash bonuses and pay raises while the news is filled with stories of companies expanding and hiring more workers. Once again, reality is more powerful than rhetoric.

Republicans undoubtedly face a difficult midterm election this year, but the tax cut legislation may enable them to minimize their losses. It might even be enough for the GOP to retain control of Congress.