The World That Pearl Harbor Created is Coming to An End 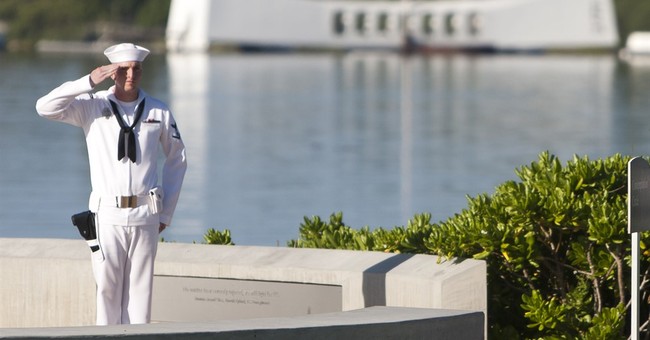 Trending
In my youth, Dec. 7 was always a big deal, as we remembered Japan's sneak attack on Pearl Harbor. Today, most of those alive on that fateful day in 1941 are no longer with us, and the collective memory of the event has faded. Subsequent generations have other powerful dates to remember. Nov. 22, the day President Kennedy was assassinated, loomed large in the lives of Baby Boomers. More recently, Sept. 11 has become the day we must never forget.

This is the natural course of history moving on. In a generation or two, even Sept. 11 will become just another day in America. But each of these events changes our nation in ways that last far beyond memories of the events themselves.

Pearl Harbor fundamentally changed America by shifting more power and authority to the federal government than had ever previously been imagined. The change happened almost immediately, as documented in a great book by Craig Shirley, "December 1941: 31 Days that Changed America and Saved the World."

To give a sense of scale, Americans today can't imagine a world where any other nation has a bigger or more powerful military. But as World War II began, "The Army Air Corps had only 51,000 trained flyers," according to Shirley's research. But "The Royal Air Force had 500,000 pilots, and the German Luftwaffe had a million pilots." Not only that, "The U.S. planes were inferior."

By the end of that war, the U.S. stood alone as the premier military power in the world. But that was just the tip of the iceberg. Something even bigger had happened to America during those years. By organizing the entire country to fight and defeat the evil of Hitler's Germany, the federal government earned trust and goodwill such as it had never enjoyed before or since.

Congress used those positive feelings to formally commit the federal government to managing the U.S. economy. At the time, most economists and most Americans assumed that the country would slip back into a Depression following the war. Instead, America enjoyed an enormous post-War economic boom to become the most prosperous nation in the history of the world.

The World War II generation had more faith in the federal government than any other Americans ever. Who could blame them? The federal government won the war and appeared to be guiding the nation's economy to smooth and never-ending growth. Later, it put a man on the moon and returned him safely to earth.

But the success did not last. The wars in Korea and Vietnam did not end well. The economy spiraled out of control in the late '60s and struggled for more than a decade. The bank bailouts of this century and other events eroded public confidence in the federal government. For those who grew up during World War II, this lack of trust was hard to understand. They still remembered the government that saved the world after Pearl Harbor.