This Thanksgiving, Here's What We Have to Be Thankful for, No Thanks to the Never-Trump Brigade

Scott Morefield
|
Posted: Nov 17, 2017 9:21 AM
Share   Tweet
The opinions expressed by columnists are their own and do not necessarily represent the views of Townhall.com. 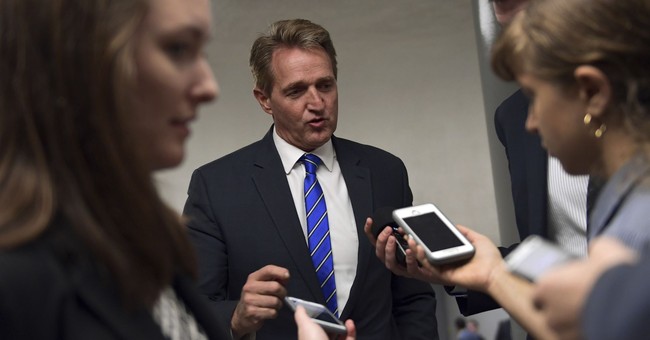 Never trust an unrepentant Never-Trumper. We can excuse them for not seeing the winning strategy that was Donald Trump in the early days of the primaries, when he was calling out “bad hombres” and insulting John McCain. We can forgive them for sticking with Ted Cruz or Marco Rubio until the bitter end, even though the polls kept saying only one person could win. We can even overlook, albeit with raised eyebrow, those who voted third-party or didn’t vote at all rather than cast their ballot for Trump. Hey, even if they got duped by that holier-than-thou egghead Evan Mc-what’s-his-face, all’s well that ends well, right? We won, so no harm, no foul. (Of course, if you’re reading this and you voted for Hillary you’re beyond help. Please, just go back to reading The Huffington Post now.)

But now, now that the crazy has really come out to play, now that Leftists have bared their teeth in Berkeley, Los Angeles, New York City, and even in the halls of Congress, there’s no longer any excuse for ignorance.

Between Jimmy Kimmel, Chelsea Handler, Michael Moore, and ‘Crazy Maxine’s’ shouts of “Impeach 45!” to adoring Hollywood crowds and antifa violence - if anyone even remotely conservative was anywhere on the fence, the crazy should have pushed them to the right side of this long ago, and if it hasn’t, it says far more about them than it does about President Trump.

They are liars, and you can’t trust them, ever.

At least liberals are outspoken about who they are and what they want. They’re easy to deal with, because they wear their uniform on the outside. Never-Trump ‘conservatives’ are a fifth-column inside the ranks of conservatism, poisoning it from within with their smarmy smiles, their useless platitudes about ‘principle’ and their noxious virtue signaling to a Left they’re seemingly more eager to please than ordinary Americans.

When it comes to politics, winning is everything. Win the public discourse, win political races, and win when it comes to implementing your agenda. Never Trumpers don’t care about winning. All they care about is being right, and despite all that President Trump is accomplishing and all he COULD accomplish if only more would unite behind him, they find more joy out of thwarting the president and his agenda than actually attempting to save America.

Granted, Trump has done a few things while in office that makes us cringe. We’ll wish he hadn’t said this or he didn’t tweet that or that maybe he’d be stronger with one policy position or another. No one individual, especially a politician, will please everyone, and it’s the same with President Trump. However, if you’re ever tempted to listen to the Never Trumpers, to the arrogant, condescending, whimperings of the George Wills or the Bill Kristols or the Jeff Flakes of the world - if you’re ever tempted, even for a millisecond, to think they could be on the mark, you need to do two things.

First, slap yourself upside the head for even giving these scumbags a moment of your thoughts. Then, you need to do a little walk down memory lane and consider that, a little over one year ago this month, we conservatives were given a remarkable gift, a gift that affects us all on a deeply personal level.

How personal? As we move into this Season of Thanksgiving, let’s remember to be thankful for where we could easily be as a nation had Hillary Rodham Clinton become our next president.

Instead of merely listening to liberal lunatics try to turn every mass shooting into a gun control speech and shaking our heads with a ‘bless their hearts,’ we’d actually be worried about real legislation to stifle our Second Amendment freedoms being passed by a feckless Congress and signed by a smirking President Hillary Clinton. Think they’d have stopped at bump stocks? Think again.

Instead of a Justice Neil Gorsuch on the Supreme Court, we’d be stuck with someone who makes Vladimir Lenin look like a capitalist. Think they’d have given us Merrick Garland? Hell, we’d be WISHING for Merrick Garland and calling Mitch McConnell an idiot for not accepting President Obama’s magnanimous offer and installing him post-haste before the election.

Instead of a booming stock market and an optimistic economy helped in no small part by relaxing regulations and other Trump policies, we’d be looking at a continuation of the Obama malaise, with a dose of Carter thrown in for good measure.

Instead of the possibility of tax cuts, we’d be looking at tax hikes and an ever growing government eager to spend that money on something else pointless and stupid.

Instead of working toward fair trade deals with other nations, we’d be looking at a continuation of the horrible trade policies that had virtually left our industrial base for dead.

Instead of an ISIS on the run, we’d be looking at bringing as many ISIS fighters as possible to our shores, as refugees and future Democratic voters of course, because “huddled masses” and all that jazz.

And speaking of “huddled masses,” instead of border security, deporting criminals, and the promise of a wall, we’d be looking at more of the same - endless Third World immigration, drugs, and God knows what else pouring over our virtually unguarded border.

Instead of a new electoral map that shows Republicans with the right message (hellooo Trump) can win in rust-belt states, we’d be looking at a blue Virginia and consequently the demographic death knell for a Republican ever winning the presidency again.

These are just a few of the gifts you should be thankful for this season of Thanksgiving. I don't know about you, but compared to THAT, I'll take an awkward tweet or a useless spat with Rosie O'Donnell any day of the week. Don’t be like the Never Trumpers. They’re the type who wouldn’t just look a gift-horse in the mouth, they’d smack it across the face with the p*ssy-hat they were wearing to virtue-signal to liberals.