Salena Zito
|
Posted: Jul 19, 2017 12:01 AM
Share   Tweet
The opinions expressed by columnists are their own and do not necessarily represent the views of Townhall.com. 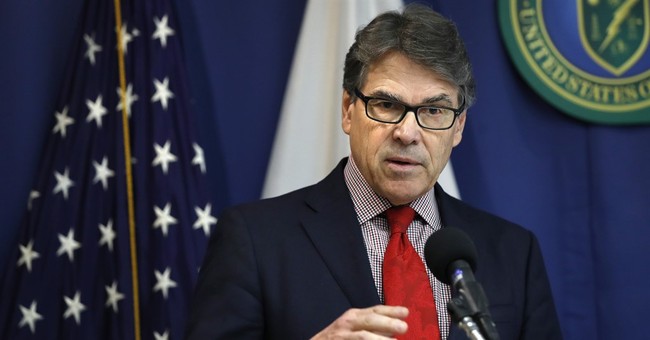 BRUCETON, Pa. -- A day after Secretary of Energy Rick Perry toured a coal-fired power plant in northern West Virginia, he sat down with the Washington Examiner at the National Energy Technology Laboratory in suburban Pittsburgh for an interview.

The facility is one of 17 government-funded national labs within the Department of Energy. It is also part of a fascinating chapter in American history, both in the development of energy and science.

The lab is working to expand the possibilities for horizontal drilling and hydraulic fracturing for natural gas in shale. Of the 17 labs, it is the only one entirely run by the federal government.

Sitting in a conference room overlooking the lush 38-acre facility, the secretary discussed the Trump administration's ambitions for energy policy, his responsibilities and approach to the office, and what he hopes to accomplish by the time he leaves office.

ZITO: What is the scope of your job as you see it?

PERRY: Well it's an interesting agency in the sense of part of what they do the general public only has a passing knowledge of. All the nuclear weapon arsenal is under the purview of the Department of Energy. So, making sure that it's safe, secure. Making sure that it works. God forbid that we ever have to use it, but if we do, we want to know it's going to work.

ZITO: How do you ensure that it is functional?

PERRY: With the prohibition against underground testing that means that super-computing becomes very important in running the models with our computers. One of the things I will discuss today with the employees is our goals -- modernizing the weapons arsenal and making sure that we modernize it appropriately.

Q: Shell is building a cracker plant not far from here. Is that part of the equation of creating an energy hub in this region? Explain what a cracker plant is, because when people who are not from an energy state hear "cracker plants" they think it's a plant that makes saltines.

A: Well, this is cracking those molecules so that you can have different byproducts; ethane, ethylene, that go into then the petrochemical industry, and yes that is adding value. That is creating a hub. If you just took that gas and burned it at a power plant, it's sort of like cooking your breakfast using hundred dollar bills. It will cook your breakfast, but it's a pretty expensive way to do it.

But if you take that gas, process it, crack it, send different streams different ways to be used in a lot of valued added processing, and that can happen right here in this region. So one job becomes ten jobs. And those are high value jobs.

The other side of what it does, President Trump's vision of making American dominant in the energy field -- this is exactly what he's talking about. He doesn't want us just to be independent. He wants us to be dominant. That means that our allies, wherever they may be in the world, know that there will be a constant stream of these products that they need to develop their countries economically.

All of our allies are very interested in our being able to develop different energy sources ... the technology that comes often out of a DOE national lab changes the world.

A: It's interesting you would say that. Walking through the plant in Longview -- it's a highly efficient, low emission plant -- and I'm in the middle of a plant that is using tons of coal to create electrical power. It's pulverizing that coal into like talcum powder. I literally wiped my hand across the first floor of this plant, and it looks like my hand looks right now wiping it across this tabletop. Totally clean. That is the innovation that we've come to expect in America.

Q: You are not a conventional secretary of energy, in the tradition your predecessors, Ernest Moniz, Steven Chu and Sam Bodman, who hailed from elite doctorate backgrounds. How does your lack of pedigree help or hurt you?

A: Well, most of the cabinet that President Trump brought in is very non-traditional, Wilber Ross, Rex Tillerson, amazingly capable individuals. ... Americans, by and large, like the idea of pushing the power out of Washington, DC, back to the states, back to the local level in a lot of ways, and asking people to come onboard who have been very successful in, well, I should say, been very successful outside of Washington, DC.

Share this on Facebook
Tweet
Dr. Francis Collins Spews Word Salad When Asked By Fox News Reporter About Case Numbers In Florida
Scott Morefield
Enes Kanter to Change Last Name to 'Freedom' as He Becomes U.S. Citizen
Landon Mion
NIH Director Francis Collins: Vaccines 'Most Likely' Protect Against Omicron Variant, 'No Reason to Panic'
Rebecca Downs
Fauci on Attacks Against Him From Sens. Paul, Cruz: 'They're Really Criticizing Science'
Landon Mion
Buttigieg on Criticism Over Comments About Racist Roads: ‘the Point Is Not to Make America Feel Guilty’
Landon Mion
Fauci Says 'We're Going to Have to Start Living with COVID' Because It Won't Be Eradicated
Landon Mion