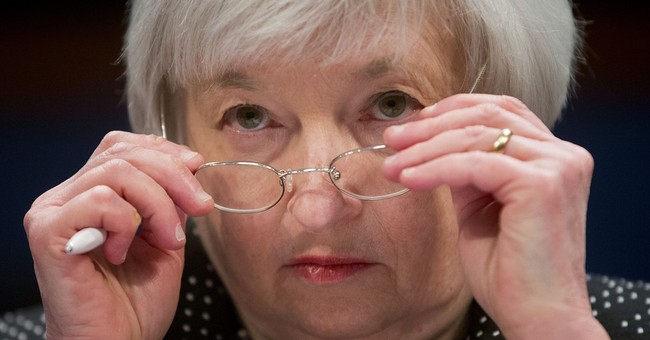 Economists are scratching their heads wondering why the windfall of low gasoline prices has not spurred consumer spending. After all, many people are saving $100 a month when they fill up their tanks at $2 a gallon instead of the $3.50 they shelled out in August 2014.

“Many economists predicted the savings would act as a giant tax cut by jolting long-weary consumers into stronger spending and pushing up sluggish economic growth,” wrote Journal columnist Eric Morath. “Instead, the economy remains mired in the slow-growth trajectory that has marked the economic expansion over the past 6-1/2 years.”

Well, let’s see. What happened six and a half years ago? Ah, yes. Just after the stock market hit bottom, the Democrats jammed Obamacare through Congress without a single Republican vote. They also rammed through the Dodd-Frank financial reform bill, under which hundreds of small banks are collapsing all over the country.

As more of Obamacare kicks into gear, more jobs are being destroyed and middle-income consumers are being saddled with higher costs and less coverage. In many cases, people who formerly had good policies are paying another $200 to $300 more per month for “catastrophic” plans with high deductibles.

Consumers are losing more money because of Obamacare than they’re saving at the pump. That doesn’t translate into carefree spending sprees.

But it’s more complicated than that. The current, cautious mood also reflects a loss of confidence that anyone in Washington can set things right or even tell the truth. American voters turned over the House in 2010 to Republicans, who then took the Senate in 2014 with the explicit promise that they would stop Obama’s socialism express train.

It didn’t happen. Year after year, the Democrats prevailed. Meanwhile, the Supreme Court tied the Constitution into knots to ensure Obamacare’s survival, unleash the Environmental Protection Agency and other rogue bureaucrats, and redefine natural marriage as a scrap of disposable bigotry.

Overall federal spending soared, leading to a national debt today of more than $18 trillion. Congress even managed to give a pass to Obama’s dangerous nuclear treaty with Iran, avoiding the constitutional requirement for a two-thirds vote by the Senate to approve all treaties. They watched passively as Obama has turned the military into a social petri dish, including pushing women into combat roles.

Even after a House revolt led to Speaker John Boehner being replaced by Paul Ryan, the Grand Old Party could not bring itself to use its power of the purse to challenge President Obama’s radical agenda.

Republican leaders have vowed that 2016 will be different.

Yes, the same people who caved every time to Obama are going to talk tough again during this coming election year. Well, that’s a relief. I was afraid they would speak softly to go along with the wet noodle they carry as their “stick.”

The big game in 2016, Rep. Ryan and Senate Majority Leader Mitch McConnell say, is to draw distinctions between the two parties.

That takes tough talk. “What we decide to allocate floor time to in the Senate, to be quite candid with you, is going to be to some extent … dictated by concerns I have about places like New Hampshire and Pennsylvania and Ohio and Wisconsin,” Sen. McConnell said in an interview, telegraphing the GOP strategy to preserve shaky Senate seats. There’s nothing like giving your opponents a chance to denounce your motives as purely political.

On September 29, House Majority Leader Kevin McCarthy boasted to Sean Hannity that the investigation by the House Select Committee on Benghazi had hurt Hillary Clinton’s presidential polling numbers. Gleeful Democrats seized this gift, calling for the “politicized” committee to disband, even as the Clinton email server scandal blossomed. If the Republicans were a football team, they would be calling penalties on themselves just short of the goal line.

Meanwhile, looking ahead to 2016, White House spokesmen say that Obama is planning executive orders on climate change and gun control. And why not? This is how he has governed for nearly seven years. Neither Congress nor most of the courts have found the backbone to overturn his executive overreaches.

But, not to worry. As Phil Gramm and Michael Solon recently wrote, “A Republican president could overturn every Obama executive action the moment after taking the oath of office.”

Yes, a newly elected president who respects the rule and the constitutional separation of powers could do that if he or she were so inclined.

Instead of walking away in disgust, we all need to do our homework before deciding on a presidential candidate. And we should support local, state and national lawmakers who will take tangible steps to preserve our liberties. The stakes are enormous.