Miracles Not of Our Making

Robert Knight  |  Dec 25, 2013
The opinions expressed by columnists are their own and do not necessarily represent the views of Townhall.com.
Top Columns
Trending on Townhall Media 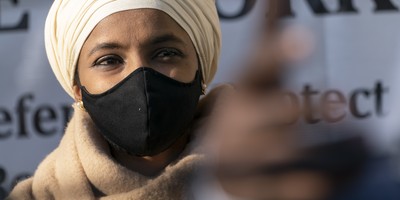 GOP Right To Deny Ilhan Omar a Committee Seat David Harsanyi
We went recently to Busch Gardens Williamsburg, Virginia, which is staging Christmas Town, a spectacular display of lights, rides and holiday themes. It’s all pretty amazing, with a 50-foot Christmas tree, a snow machine at the “North Pole,” nuts roasting on an open fire, and even live penguins.

Wherever you walk, you hear Christmas music in the language of the “country” you’re visiting. In merry old England, a four-person Victorian choir sings traditional carols in lilting harmonies.

Germany’s Oktoberfest area is decked out in stunning Christmas grandeur. In Ireland, upbeat jigs give way now and then to a lone bagpiper who plays beautifully somber carols.

In Italy, which has a sculpted Nativity scene, there is also, disappointingly, a stage show entitled “Miracles,” where traditional Christmas carols are subsumed in a humanistic score of lesser, modern music.

I knew we weren’t in Bethlehem anymore when three women strolled on to the stage dressed in flowing, golden gowns and began singing about the “miracle” of the human spirit and “one world” platitudes while dancers in white leaped about. Had we stumbled into a United Nations-sponsored globalist celebration?

At one point, the lead singer wails, “I believe in the power of you and I.”

Cathedrals, with their soaring, heavenward spires, include gargoyles to remind us of man’s imperfection; perhaps Christmas Town’s “Miracles” show performs the same function. Or maybe comedian Jerry Seinfeld persuaded park officials to give a nod to the secular, anti-Christmas parody “Festivus for the rest of us.”

As I watched the crowned diva belt out another New Age anthem, it was as if Lucy van Pelt’s unrealized “Christmas Queen” character from “A Charlie Brown Christmas” had taken over. Linus would have shaken his head, and said, “That’s NOT what Christmas is all about, Charlie Brown.” In 2 Timothy 3:5-7, the apostle Paul warns of being fooled by man-centered claims of virtue, “having a form of godliness but denying its power.”

The modern mind, which loves seeking truth but fears finding it, is ingenious in devising ways to eject God from polite company. Flannery O’Connor’s 1952 Southern Gothic novel Wise Blood features a poor, lost grandson of a preacher who inspires a con man to create the Holy Church of Christ Without Christ. The idea is to have the trappings and benefits of church, but without Jesus. It doesn’t work.

In the Chronicles of Narnia, C.S. Lewis paints a picture of a cold world where God has been replaced by man’s magical substitutes. It’s a place where it is “always winter, but never Christmas.”

One of the fastest growing religions in America is the dusted-off Gnosticism in which we’re led to worship humanity because a divine spark is said to be inside all of us. On our own, we can tap this “power.”

By contrast, Christmas is about God’s love. A sacrificial lamb came into a very dark world 2,000 years ago when God became flesh, born as a baby in Bethlehem. Thirty-three years later, Jesus would die for humanity’s sins and afford us all a Way to restore our relationship with a loving God. According to Scripture, we have to acknowledge our need. If we’re too proud to ask, it demonstrates that we still think we call the shots, not God, “Who so loved the world that he gave his only begotten Son.”

Getting back to Christmas Town, the bright side is that it’s quite spectacular and great fun, with six million lights. Christmas lights celebrate God’s bringing light into the world through His incarnation. For years, people have bemoaned the holiday season’s commercialization, which does test one’s sanity at times. But when else do you hear Christmas carols wafting through malls and stores?

At Busch Gardens’ Christmas Town, you can easily find the true spirit of Christmas amid the extravaganza. As my dear late Mother used to say while hanging one more ornament on our overloaded tree, “the more glop, the merrier.”

Just before leaving the park, which we much enjoyed despite the odd chill of the “Miracles” show, we took in the day’s final performance of “Gloria!” in the Ireland sector.

“Gloria!” is the real deal, telling the tale of the Christ child’s birth through song and pantomime. As long as I’m playing theater critic, I’ll venture that the show is initially a bit ponderous, but gets better and better, and – spoiler alert – ends with a powerful gospel number that rocks the theater with joy.

Of course, anywhere you go amid the clatter of modern life, you can listen for the still, small voice of the One Who came to save us—and rejoice.