Rich Galen
|
Posted: Aug 29, 2016 9:55 AM
Share   Tweet
The opinions expressed by columnists are their own and do not necessarily represent the views of Townhall.com. 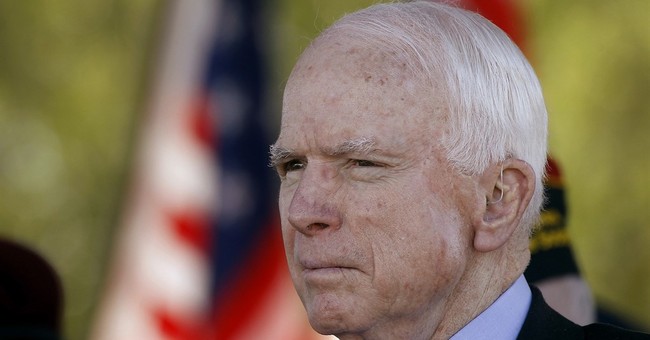 Of the two Republican primary elections for U.S. Senator tomorrow night, one is here in Arizona. U.S. Sen. John McCain is running against St. Sen. Kelly Ward. Although public polls show McCain will win in a walk, this is a weird year and turnout for a primary election in late August in Arizona (the high temperature yesterday was 104) is iffy at best.

McCain has been running a serious campaign with an intense ground game - his campaign claims its volunteers have made 3 million phone calls and knocked on 50,000 doors - so he will likely win, but if his supporters think they can stay home and wait until November, they may be disappointed.

The other big primary tomorrow night is in Florida where Marco Rubio reversed course and decided to run for his U.S. Senate seat again after having declared he was done with the Upper Chamber. A recent poll released the St. Leo University Polling Institute on August 23 had Rubio leading his closest rival by just over 54 percentage points: 68.2 to 14.

Two things. First, the caveat about this being the strangest of political cycles is still on the table; and, second, University of Virginia's Larry Sabato still has Florida as a "toss-up" in the Fall.

As you know, my predictive skills are about as good as my math skills so I will hide behind this here rock until the polls close tomorrow night when we'll all know the answers.

The two things that connect the Arizona race with the Florida race is one five letter word: Trump. Rubio was one of the 17 candidates who started this cycle running for the Republican nomination. McCain was an innocent bystander whom Trump attacked for having been a prisoner of war.

The question is: Is there a Trump factor in this races? If so, what and how big will it be?

This is becoming a larger question for what are called "down ballot" races in a Presidential year. Every office from Governor down to small town Mayor may be affected by the way Donald Trump's campaign performs over the next 71 days.

If he continues to trail Hillary Clinton by as wide a margin as he appears to today it means big trouble for Republicans down ballot. The aforementioned Larry Sabato's team now has the Electoral College race (including "Safe" states, "Likely" states, and "Leaning" states for each candidate) as 348 - 121. For Clinton.

Other analysts have different numbers and you are free to create your own map, but as a trend marker, this one is sending up danger flares.

The obvious problem for Republican candidates is if Trump gets skunked in their state, they might well get dragged down with him. The not-so-obvious reason is because if Trump is getting skunked in a state, Republican voters might just stay home and not vote at all.

As we've discussed before if a voter for my opponent doesn't participate, that's one less vote I have to offset and thus is a huge benefit for me.

According to the book (assuming I'm reading these data correctly), "Vital Statistics on Congress" by Norm Ornstein, et.al. (via the Washington Post), 2012 - the last Presidential cycle - showed that ticket splitters - those who voted for one party for President and the other party's candidate for the U.S. House fell to just 5.7% - a "92-year low."

President Barak Obama was on the ballot in 2012 and he won't be this year and Clinton's coattails won't have the same impact as Obama's, so your mileage may vary.

Nevertheless, if I were running a Republican campaign for any office, I would have everyone in the car looking for the nearest exit ramp to get off the Trumpway as quickly as possible.

As we move toward Labor Day and into the final sprint to November 8, every GOP campaign in the nation is looking at the polling data - public and private - to determine if and when to break loose from Trump

There are thousands of down ballot races that will be affected.