Rich Galen
|
Posted: Jul 25, 2016 12:01 AM
Share   Tweet
The opinions expressed by columnists are their own and do not necessarily represent the views of Townhall.com. 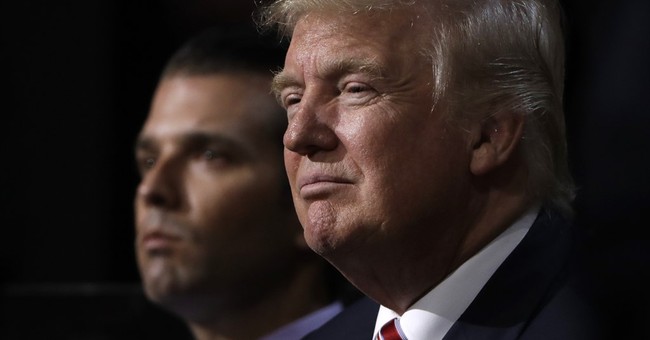 In between the two conventions (hence the clever, if undecipherable, title) the only poll that was in the field during whole of last week was the LA Times/USC poll which, among likely voters, showed Donald Trump with a three point lead over Hillary Clinton 45 percent to 42 percent.

As we have painfully learned, one poll does not an election make, so let's just take it as read that Donald Trump has been steadily closing the gap on Hillary Clinton especially since she wasn't judicially, but was oratorically, indicted over her e-mail issues by FBI Director James Comey on July 5, 2016 - less than three weeks ago.

In fact, about a week before Director Comey's press conference, Clinton led Trump 46.4 to 39.6 or 6.8 percentage points in the RealClearPolitics average of national polls.

By a week after Comey, the creep had begun as Clinton's lead shrunk to 4.5 percentage points which doesn't sound like a lot but it is a 34 percent decline in her lead.

As of this writing - about mid-day on Sunday - her lead in the RCP averages has dropped to under two percentage points 44.6 to 42.7.

It would not surprise me at all to have a slew of new numbers released Monday morning for polls that went into the field on Friday (after Trump's acceptance speech) and finished up Sunday night giving us a snapshot of his convention bounce, however short-lived as Clinton's convention prepared to open on Monday afternoon.

Along with our long-standing suggestion that we compare polls by the same media - ABC with ABC, NBC with NBC, ect. - the pre-convention Washington Post / ABC News poll had Clinton leader Trump 47-43 among registered voters.

With the average convention bounce, according to the University of Virginia's Larry Sabato, being 5.9 percent for Republicans, we can expect Trump to score about +2 post-convention.

However, the average Democrat convention bounce has been 4.3% for Democrats, so Clinton should have been able to recover to about +2 in her direction by this time next week.

As always, remember that national polls are fun to tinker with and discuss, but the election on November 8 will be counted state-by-state - so winning California by 30 percentage points gains the victor exactly the same number of electoral votes (55) as if he or she were to win by 3 percentage points.

Winning by +30 obviously gets you far more popular votes, but that's not the way we keep score in Presidential elections.

A strong whiff of anti-Semitism rolled out of Democratic National Committee headquarters over the weekend as Wikileaks released about 20,000 emails. At least one of them was from a DNC employee discussing the merits of calling Bernie Sanders an "atheist" which, according to the leaked email, was important because "My Southern Baptist peeps would draw a big difference between a Jew and an atheist."

It is generally accepted that the Russians hacked the DNC computers and fed the emails to Wikileaks. That leads to the logical question: Did the Russians also hack Hillary Clinton's computer and when can we expect Wikileaks to release the damaging emails from that adventure?

That led to embattled DNC chair (and Member of Congress from Florida) Debbie Wasserman Schultz being dropped from the list of convention speakers so as not to incite a Ted-Cruz-like reaction from the Bernie Sanders delegates as we saw between the Cruz and Trump delegates last week.

Update: Since I wrote that paragraph, Wasserman Schultz has resigned effective Thursday, after the Democrat National Convention.

This may further inflame the socialist-wing of the Democratic party - the Sanders wing - who have not been pleased with Clinton from the start. Add to this the fact that Clinton chose Virginia Senator Tim Kaine - who comes out of the moderate wing of the Democratic Party - as her running mate and you have at least put the wood shavings in a pile just waiting for a match to light them in Philadelphia.

Kaine is a pro-trade, pro-life, pro-banking, pro-military former Governor of the Commonwealth of Virginia. That is a set of traits the Left-est wing of the Democratic Party will not likely let completely slide this week in Philadelphia.