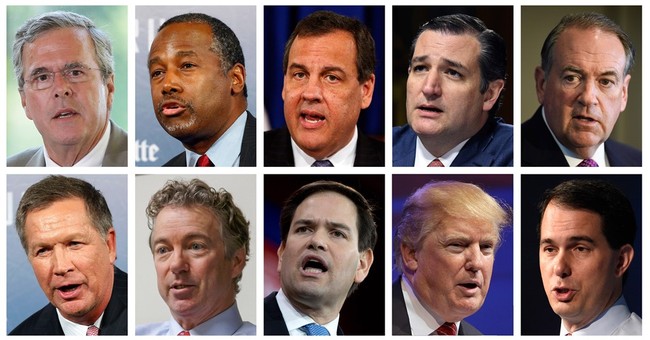 Well, that's over. The question I had going into the debate was: Can it possibly live up to its hype?

Through the first 15 minutes, it certainly did. The moderators did a good job of coming up with questions that were not "gotcha" questions, but helped make the candidates think on their feet rather than remember applause lines.

Here's how I think each of them did with a couple of words about why I think that:

Donald Trump - Trump apparently decided to let Trump be Trump. He took a hit from Megyn Kelly on his calling women unattractive names and said, "I don't have time for political correctness," which he came back to several times. He not only didn't back down from any earlier comments, he went straight at Rand Paul on several occasions (after Paul took an early shot at him).

He generally got away with the generalizations that have gotten him to this point. I don't know that he did anything to expand his base, but while he's 2-1 favorite over anyone else on the stage, it's not clear that he has to.

Jeb Bush - Didn't back down from his family name, but said (as he has before) that he governed Florida as his own man. His record in Florida was a big part of his presention: Schools, Abortion, Health Care, and Economic growth. He was certainly a grownup on the stage, but the others rose to the challenge so he wasn't the grownup on the stage.

Scott Walker - This was Walker's first real chance to be introduced to a lot of GOP voters outside Wisconsin. He wasn't sparkling but neither was he reticient. He doubled down on his pro-life stance. When asked about changing his position on immigration reform, said "I listened to the people." At a minimum he showed he belonged on the stage.

Mike Huckabee - Huckabee has probably been in more of these debates than the rest of the candidates combined. He is a good debater, makes his points clearly, but he seemed to have lacked some of the spark that he used to demonstrate so easily.

Ben Carson - Dr. Carson is a pleasant enough man, but I didn't see he brought anything to the stage: Not passion, not new ideas, and not a deep understanding of complex issues. He is a talented speaker but we've been through about seven years with a talented speaker in the White House.

Ted Cruz - I am not a fan of Sen. Cruz' so take this with that in mind. I thought he was too Congress-centric in many of his answers. He reminded me of a State Rep debating at the Rotary Club citing the bills he or she has introduced. I don't think he didn't himself any harm, but I'm not sure he moved any votes.

Marco Rubio - Is very smooth - and I say that in a good way. I think he was the best natural politician on the stage. In spite of his obvious intellectual and political skills, unlike Obama in the 2008 debates, I'm not certain that Rubio physically matches up against many of the others on the stage.

Rand Paul - Sen. Paul had a tough night. He took a swipe at Trump and Trump spent some of the rest of the debate making him pay for it. He looked uncomfortable, he sounded defensive and it would not surprise me if he begins to unwind his campaign in the near future.

John Kasich - I admit I am a fan of Gov. Kasich and have been since he was a freshman Congressman. I said he had the highest growth potential because he has only been in this thing for about three weeks and climbed into the top ten. I think he was one of the winners last night. Maybe the big winner.

All the candidates were prepared for their opening question. Reminded me of an NFL team that starts with the first five plays having been decided in the coach's box before the game even started.

It is possible that, because it was the "Happy Hour Debate" rather than the "Prime Time Debate" they felt less pressure than the group that would start four hours later. They each used the leadoff round to tout their bona fides for at least making the race, if not being President.

Here's how I scored it:

Carly Fiorina Won. Period. She started with what she thought would be a good joke, but it fell flat. She had to back and fill with the dreaded "¢ but seriously" deflection. As she got into her rhythm she was, perhaps, the star of the show. Certainly when the conversation moved to domestic terrorism she used her tech creds to talk with certainty about cyber-terrorism. With Jindal, one of two up arrows.

Bobby Jindal sounded like Rick Perry wanted to sound: Dispassionately passionate, comfortable with the material and, therefore comfortable on the stage. He was one of the two candidates that I thought outperformed.

George Pataki looked good and sounded good but I have the sense that, like so many other Governors of New York and California, he thinks that running for President is his reward.

Rick Santorum was smooth on the stage. He speaks with facility from his time in Washington and his time on the stump. But, if he was ever going to be the GOP nominee it would have been four years ago. Not this year.

Lindsey Graham his standing as a sitting U.S. Senator means he knows a lot about a lot. Having worked on The Hill, I know that I picked things up almost by osmosis - just listening to other staffers and Members chatting with one another. He was the foreign policy/armed services expert in this group.

Rick Perry was too much. Someone must have told him that talking REAL LOUD would make him appear stronger than the others. It didn't. It made him sound like he was shouting into the microphones. It also made him look and sound like he is just this side of political panic.

I still don't get the rationale for Jim Gilmore's campaign. I like the guy, but he is not going to be the nominee and I'd like to talk to some people who are contemplating giving him money to see what I'm missing.

In sum, Carly Fiorina and Bobby Jindal moved up on the Galen Scale. Perry and Gilmore moved down. The others were OK, but didn't turn any heads, or move any numbers.