Did Obama Take a Dive? 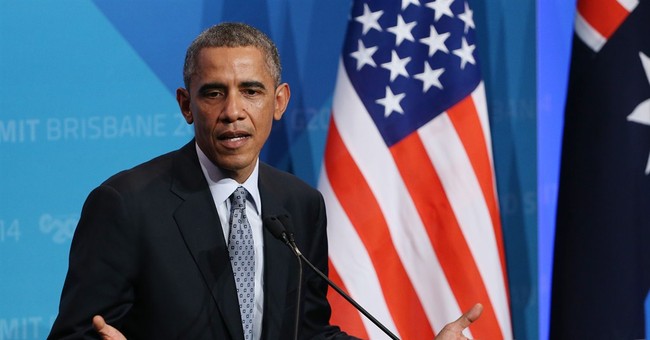 In boxing parlance to "take a dive" is to throw a fight by pretending to have been knocked out thus letting the other guy win.

Even before I read this Lede by Maggie Haberman over the weekend on Politico.com:

"Former President Bill Clinton said he was surprised by the Democrats' lopsided losses in Senate races in this year's midterm elections,"

I had thought something was amiss with the election results.

You know the mantra I have been repeating: "When you're on the wrong side of that kind of wave you know you will lose almost all the close ones, and you will probably lose a couple that were never even on your radar."

About the only close election Democrats won was the Senate race in New Hampshire. The two surprises were the Governors races in Maryland and Illinois. I wasn't that precise in the run-up to the election, but I could feel the disturbance in the Force.

When then-President Clinton and then-Speaker Newt Gingrich were locked in the shut-down battles of 1995-1996 (after the GOP had taken control of both the House and the Senate) Clinton had two advantages:

First, he is probably the best combination Politician/Policy Wonk we've had in the White House in our lifetime.

Second, his opponent was Newt Gingrich.

Back in those days few Americans had no opinion about Newt. Most didn't like him, but his supporters were passionate. All his opponents had to say was "Newt is in favor of this" and fifty-something percent of Americans were against "this" no matter what "this" was.

The Obama team has probably studied that period and has decided to employ the same strategy. The difficulties President Obama is facing are: He's not a politically wily as Clinton and he's not pushing back against someone named Newt. He's pushing against someone named Boehner and another guy named McConnell.

I'm pretty certain that if you put the names John Boehner and Mitch McConnell on a piece of paper and asked people walking into a grocery store just about anywhere outside the Washington, DC metro area, a pitiful few could identify both.

If the Democrats kept control of the Senate the message would continue to be muddled with the GOP running the House.

But, the Obamas have won two national elections, so they understand that. The solution? Find a way to push back against The Republican Congress.

It is much cleaner to have Republicans in charge of both chambers so the White House message team can simply point up Pennsylvania Avenue and blame "The Congress" for whatever ills need Presidential medicine.

Why else would Obama say, as the Washington Post reported, "I am not on the ballot this fall. But make no mistake: these policies are on the ballot. Every single one of them."

Or, why as reported by The Hill newspaper, would he have said the "lawmakers avoiding him on the campaign trail were 'strong allies and supporters' who have 'supported my agenda in Congress'"?

Both of those statements cause wails of political pain among Democratic candidates from Florida to Alaska.

The Washington Post also learned, following a post-election session with Senate Majority Leader Harry Reid's chief of staff that Obama had refused a direct request from Reid as early as last March "to transfer millions in party funds and to also help raise money for an outside group."

"We were beating our heads against the wall," the staffer said.

Over the next few weeks we may see President Obama not just draw a line in the sand, but raise the Constitutional equivalent of the Berlin Wall between the Congress and the Executive if he (a) signs an executive order to make sweeping changes in U.S. immigration policy and (b) vetoes the Keystone XL Pipeline bill if it gets to his desk.

Neither the fact that that the Senate is still under the control of Harry Reid nor the Keystone Pipeline bill is being pushed by Louisiana Democrat Mary Landrieu will make a difference to the White House. They will spend the next two years - starting right now - running against The Congress.

The only way Obama could be sure to have a clear running lane for the next to years was to have that Congress under the control of Republicans.

To make sure of that, Obama had to take a dive.

On the Secret Decoder Ring page today: Links to the Clinton piece, the two campaign statements, and the piece about the Reid/Obama feud.

Also a license plate Republicans across the land can cheer.