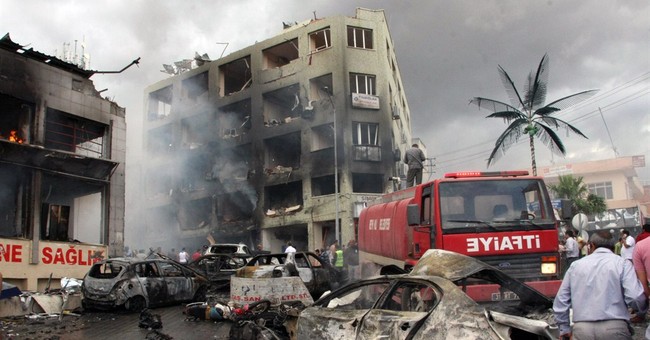 People who travel overseas with any regularity know how difficult it is to keep up with news from the U.S. CNN International runs Anderson Cooper and other domestic programs, but the news inserts are for, as the name suggests, and international audience - not for travelling Americans.

In a sports break, for instance, the top news was a change in management at Manchester United. I know that's a major soccer team in the U.K. but it would be like telling a Romanian that Chip Kelly has taken over the head coaching job for the Philadelphia Eagles from Andy Reid.

Actually, you could say the same thing, and get the same blank stare, in just about any Starbucks outside the Northeast of the United States.

Some stories came through anyway.

The increasingly dangerous civil war in Syria moved into a new phase over the weekend when two car bombs killed 46 people in Turkey in a town along the Syrian border.

Turkey, according to the Wall Street Journal, blamed Syria for the blasts and announced the arrest of nine people with "ties to the Syrian intelligence services."

Small towns in Turkey along the border have become a major destination for Syrians trying to escape the war. More than 70,000 people are reported to have been killed so far.

Turkish officials queued up to pledge that Ankara would respond, but there was little sign that Turkey was a planning military retaliation on the scale of Israel's strikes against Syrian targets earlier this month.

That's the good news - such as it is. The bad news in their piece was this:

As the town buried their dead, anger against Syrian refugees who had moved to the town in thousands was palpable, with some residents vowing to eject Syrians from the town.

Therein lies the problems. The Turkish residents blame the refugees for causing their town to become a target for Syrian-connected terrorists, then they might take it upon themselves to fix it: Throw the Syrians out or, worse yet, allow vigilantes to take over and become lynch mobs in an effort to frighten refugees to leave.

"Additional security forces from different parts of Turkey to keep the peace as groups of young men roamed the town's main thoroughfare looking for Syrians that hadn't fled the town."

Every political leader on the planet is looking for events that might cause the Syrian civil war to spread.

The WSJ piece points out that

Turkey, which shares a 565-mile border with Syria, has been a crucial supporter of the Syrian rebel cause and Ankara has allowed its territory to be used as a logistics base and staging center for Syrian insurgents.

If the Turks did not appear to be protecting the Syrian refugees, then Iran might have used that as an excuse to help its ally Syria by sending forces to the Syrian side of the border to protect them.

Turkey might then have to send military forces to its side of the border to ensure the Iranians didn't venture across.

Other countries might begin to choose sides and sooner or later someone would shoot someone else.

Trip Report Our visit to Malawi with the ONE Campaign is proceeding well. Our initial meetings have been with people who are working to get local input into that the next set of goals should be for international groups like the Millennium Fund.

They are reaching out to people here and elsewhere on the Continent and asking people to become involved using text messages with their suggestions. The texts are free to the subscriber and in a few weeks they have gotten some 22,000 responses here.

Small steps along a long and difficult path.

On the Secret Decoder Ring page today: The Wikipedia entry for Monkey Bay, an article about that Man U issue and to the Wall Street Journal article.