Rebecca Downs
|
Posted: May 23, 2022 12:01 AM
Share   Tweet
The opinions expressed by columnists are their own and do not necessarily represent the views of Townhall.com. 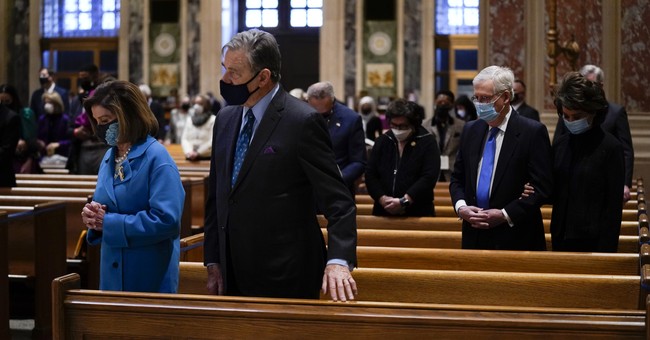 On Friday, San Francisco Archbishop Salvatore Cordileone announced in a letter addressed to House Speaker Nancy Pelosi that she is not to present herself for Holy Communion. This comes as she professes to be a "devout Catholic" despite her support for abortion, in direct contradiction to the teachings of the Catholic Church. As the archbishop said in his announcement, he has made several efforts to steer Pelosi in the right direction before it came to this.

Archbishop Cordileone referenced the numerous attempts when tweeting a link to the announcement while also pointing to "the grave evil [Pelosi] is perpetrating, the scandal she is causing, an[d] the danger to her own soul she is risking."

The archbishop's decision comes after his letter from April 7, 2022, informing Pelosi "that, should you not publically repudiate your advocacy for abortion 'rights' or else refrain from referring to your Catholic faith in public and receiving Holy Communion, I would have no choice but to make a declaration, in keeping with canon 915, that you are not to be admitted to Holy Communion."

In a pastoral letter from last May, "Before I Formed You in the Womb I Knew You: A Pastoral Letter on the Human Dignity of the Unborn, Holy Communion, and Catholics in Public Life," Archbishop Cordileone laid out the "gravity of the evil of abortion" and discussed the "moral evil" involved, including with "cooperation."

The reaction from those opposed to Friday's announcement was apoplectic.

Several trends regarding the announcement found their way onto Twitter, including "#TaxTheChurch." Those in favor claim that the archbishop engaging in a matter with one of the faithful as high-profile as Pelosi is engaging in political activity.

Archbishop Cordileone also wrote a letter to the faithful of San Francisco, in which he referenced how he "received letters from very many of you over the years expressing distress over the scandal being caused by such Catholics in public life who promote such grievously evil practices as abortion."

He also shared that he "responded that conversion is always better than exclusion, and before any such action can be taken it must be preceded by sincere and diligent efforts at dialogue and persuasion."

Those who make such arguments condemning the archbishop's actions surely did not read this point made by the archbishop: "Please know that I find no pleasure whatsoever in fulfilling my pastoral duty here. Speaker Pelosi remains our sister in Christ. Her advocacy for the care of the poor and vulnerable elicits my admiration. I assure you that my action here is purely pastoral, not political. I have been very clear in my words and actions about this."

Archbishop Cordileone is not wading into political matters of the U.S. Congress. He is fulfilling his pastoral duty to lead a member of the Church back into the light. Speaker Pelosi remains the speaker.

Pelosi is indeed a high-profile figure. She is not only one of the most well-known Catholics in the country but the world. By professing herself as a "devout" Catholic, she is creating a grave public scandal by also fighting in favor of abortion as strongly as she does.

The Church does not seek to remind the faithful about the truth of its stance of firmly rejecting abortion because of politics but because of truth. Abortion has been a political issue for the past several decades, this month especially. But the Church and her teachings have been around for millennia.

For all the complaints about Pope Francis, he does affirm the Church's stance on abortion. "His Holiness, Pope Francis, in keeping with his predecessors, has likewise been quite clear and emphatic in teaching on the dignity of human life in the womb," Archbishop Cordileone reminded in his opening of Friday's announcement.

He went into even greater detail in the letter to the faithful. "Pope Francis, as much as any pope in living memory, has repeatedly and vividly affirmed the Church's clear and constant teaching that abortion is a grave moral evil," the archbishop wrote, also pointing out that the pope's remarks in standing up for life have been made "eloquently."

In his announcement and his letter to the faithful, Archbishop Cordileone also laid out Speaker Pelosi's recent support for abortion with her vowing to pass the Women's Health Protection Act (WHPA) which would not only codify but expand Roe v. Wade. The House passed the WHPA last September.

Pelosi has also pushed to get rid of the Hyde Amendment, which protects taxpayers from funding elective abortions. The House has voted to do as much as well. Pelosi even referenced her Catholic faith while flagrantly touting her disregard for Hyde.

Most alarming is that Pelosi won't even allow for a vote on the Born-Alive Abortion Survivors Protection Act, which would enforce legal protections for babies born alive from abortions. Republicans currently have a discharge petition to try to force a vote.

While some may take issue with Cordileone's act of fulfilling his pastoral duties, the archbishop is not only acting for the good of the Church but for the good of Pelosi herself and her soul.

The archbishop closed in part by mentioning that he "will continue to offer up prayer and fasting for [Pelosi]" and asks "all of the faithful of the Archdiocese of San Francisco to pray for all of our legislators, especially Catholic legislators who promote procured abortion, that with the help and under the guidance of the Holy Spirit, they may undergo a conversion of heart in this most grave matter and human life may be protected and fostered in every stage and condition of life."

The letter to the faithful goes even deeper. "Speaker Pelosi has been uppermost in my prayer intentions ever since I became the Archbishop of San Francisco. It was my prayer life that motivated me to ask people all around the country to join me in praying and fasting for her in the 'Rose and Rosary for Nancy Campaign.' I especially pray that she will see in the roses she has received a sign of the honest love and care that many thousands of people have for her," Archbishop Cordileone wrote.

It is not merely Speaker Nancy Pelosi who professes to be a "devout" Catholic while being so pro-abortion. President Joe Biden is in the same position, though it does not appear that Cardinal Wilton Gregory of Washington, D.C., or Bishop William E. Koenig of Wilmington, Delaware, will be so bold in standing up for not just the truth on abortion but for President Biden's soul.

Nevertheless, when it comes to the prayers of the faithful, one might also wish to pray for the courage of other pastors to have the same care and consideration as Archbishop Cordileone.