The Constitution Can Unite Conservatives, Libertarians and Independents ... and Even Save the GOP 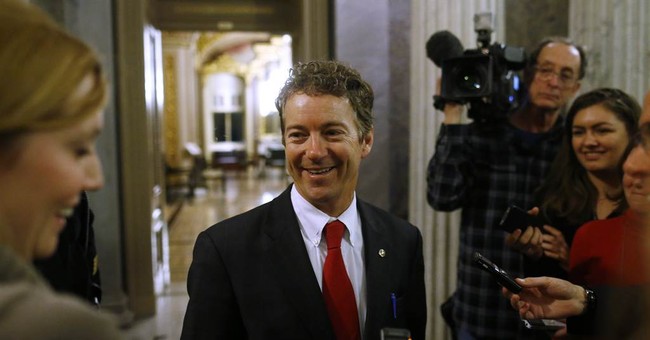 The GOP confronts what could be a crippling dilemma. If real it could prove fatal to its viability as a political party. Electoral victory requires both its libertarians and its social conservatives. And they are at odds.

This is magnificent. But it is not war.

Meanwhile, social conservatives look upon libertarians in much the same way as the U.S. Army troops looked at Gort in The Day The Earth Stood Still. No good can come of this. My fellow conservatives! Repeat after me: Klaatu barada nikto.

Both party elements need to work together to survive the assault by Big Brother. For many years, libertarians and the social conservatives made common cause against the common enemy of communism. Communism is dead. No comparably impressive adversary appears on the horizon. (Obamunism, for all of its horrors, is a pallid threat compared with having 45,000 nuclear weapons pointed your way.)

And, as we discovered in 2008 and 2012, divided we fall. This is especially true in that the party’s Superconsultants and operatives tend to truckle to the donor base. And if the donors say to marginalize the social conservatives, well, Republican Superconsultants live by the golden rule: “he who has the gold makes the rules.” They do so even if it consistently, demonstrably, loses elections.

Will the libertarian-conservative anti-Big-Brother coalition crumble? Will the GOP break into warring duchies? It could happen.

Consider the Great Christie-Paul War of Words of 2013. The urban-elite Chris Christie launched a Pearl Harbor attack against the rural-populist Rand Paul. Enough of that would, of course, leave the field clear for the Democrats to elect the whole federal government in 2016. And, Gov. Christie, while Time Magazine will reward you with sycophantic coverage for driving wedges in the Republican coalition that’s … trading birthright for pottage.

But a crumble is not the most likely outcome. The GOP more likely is poised to emerge more strongly than it has been in many cycles. As quantum physicist Niels Bohr once said, “How wonderful that we have met with a paradox. Now we have some hope of making progress.”

What the Republican Party is confronting appears more a paradox than a dilemma. Its predicament could prove a source of strength rather than doom.

The intra-party fracture is most pronounced when it comes to policies touching on sexual mores. Libertarians tend to reflect the mores of urban elites, favoring gay marriage and, for many (although by no means all), a laissez faireattitude toward abortion. This sophisticated stand, of course, wins props from The New York Times. It brings rewards from many, wealthy, party donors.

Yet it has several major handicaps. The most salient of these is that it demonstrably loses votes. For a political entity, that’s a poison pill.

As Frank Cannon, president of the American Principles Project (with which this columnist has a professional association) has repeatedly pointed out, while sophisticated values has social cachet they lose net votes. Presidential candidate John McCain, refusing to campaign on social issues, lost California by a whopping 24 points. That same year California’s Prop 8, banning gay marriage, won by 4 points.

This fact makes urban elites uncomfortable. They consider “traditional values” déclassé … or even bigoted. Nonsense. America is, after all, a representative democracy. It is from the “consent of the governed,” the Declaration of Independence says, that are derived “the just powers” for which Governments are instituted among Men.

It is right here, and in the Declaration’s successor document, the Constitution, that the forces uniting libertarianism and conservatism, and the key to the GOP’s salvation, reside. The Constitution, including the Bill of Rights, is replete with guarantees of liberty upon which libertarians and conservatives can build a healthy concordat — even including provisions with which they might not be fully comfortable.

As George Washington stated in his farewell address: "Of all the dispositions and habits which lead to political prosperity, religion and morality are indispensable supports. In vain would that man claim the tribute of patriotism, who should labor to subvert these great pillars of human happiness. . . ."  Prohibiting morality and ethical codes to religion, or to society because based in religion, makes a travesty of the Bill of Rights. Moral codes of religions have Constitutional dignity. The State is constrained, by the Constitution, to show some respect.

Whether or not one agrees with orthodox religious values … the adherents are legitimately, and constitutionally, entitled to have, to practice, and to press for the State to reflect their values. Libertarians and conservatives can disagree while taking a principled stand for the legitimacy, under the Constitution, of one another’s position. Even though many libertarians fully approve of gay marriage they can, with authenticity, also honor the First Amendment guarantee of “… no law …prohibiting the free exercise [of religion].”

There is much to collaborate on: preserving freedom of speech, and of the press, and of the free exercise of religion; honoring the right to peaceably assemble and petition for redress of grievances; not infringing the right to keep and bear arms; rehabilitation the right of people to be secure in their persons, houses, papers, and effects against unreasonably searches and seizures; the right not to be deprived of life, liberty, or property without due process of law. Even, casting the net a bit wider, the classical gold standard and the repeal of the Estate tax!

Meanwhile, social democrats have their own, abundant, internal contradictions. Most glaring right now: the American health care system indeed is a scandal. We get some of the most expensive and worst health care of any industrialized country. Yet the Democrats’ purported solution, Obamacare, portends to thrust us out of the frying pan … and into the fire. Senator Max Baucus, a Democrat and one of its legislative architects, called it “a huge train wreck coming down.” Good intentions are no substitute for making us mere voters actually better off.

Bohr’s comment about paradoxes and progress connotes that there are no such things as paradoxes in nature. The discovery of an apparent paradox creates the possibility of progress by revealing a fallacy in our perspective. Only at the far fringes of libertarianism and conservatism do these two worldviews enter red-line-crossing conflict. They are natural allies.

Call this columnist crazy but … respect for the Constitution, and our constitutional rights, can reunite the GOP, and unite it with the Independents, creating a winning combination. Crazy? This columnist, again, takes solace from Bohr, this time to Wolfgang Pauli: “We are all agreed that your theory is crazy. The question that divides us is whether it is crazy enough to have a chance of being correct.”