Rachel Marsden
|
Posted: Mar 13, 2019 12:01 AM
Share   Tweet
The opinions expressed by columnists are their own and do not necessarily represent the views of Townhall.com. 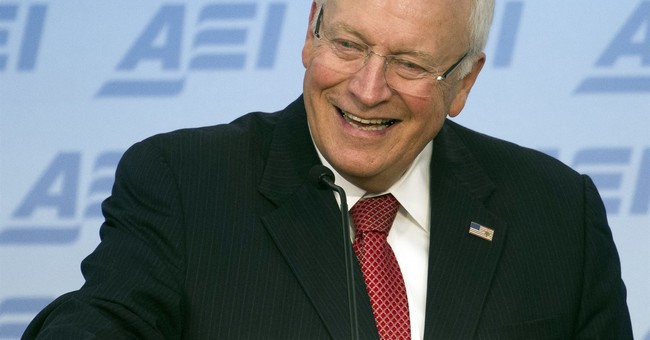 Cheney, who helped spearhead conflicts in the Middle East earlier this century that still haven't ended, chastised Pence over Trump's attempt to scale back America's foreign engagements, according to the Washington Post. Cheney lamented that Trump had canceled the regularly scheduled military bicep-flexing exercises with South Korea -- a ritual that primarily served to annoy China.

The former VP also expressed his distaste for a new Trump policy idea that, according to a Bloomberg News report, "would insist that the Germans, the Japanese, and the South Koreans pay total cost for our deployments there, plus 50 percent on top of that." Cheney said that it sounded like a "New York real estate deal."

The bigger concern for interventionist neoconservatives like Cheney should be the possibility that allies seize the opportunity to kick U.S. troops out of their countries by using cost as an excuse. It's kind of like the kid you can't eject from your basement demanding that you raise his allowance or else he'll leave.

Nowhere has it been reported that Cheney took issue with the Trump administration's political interference in Venezuela, or with Bolton's constant stream of tweets advocating regime change. Nor did Cheney criticize Pence's recent trip to Europe, where the vice president aggressively advocated Iranian regime change in front of European audiences that were visibly unsupportive of the idea.

Why is it that these confabs sponsored by big donors to the Washington establishment usually showcase the advocacy of foreign interference and almost never raise the possibility of a pivot away from military engagement in favor of economic and diplomatic efforts? Are these genuine opinions about what's best for America, or are such viewpoints being pushed by self-serving interests?

Americans have a right to know the sources of cash behind think tanks and the people within them who attempt to steer foreign policy, particularly if any of that money comes from foreign sources. The work these people do doesn't exist in a vacuum. This is the pool from which those who end up in positions of power are typically chosen. Trump said during his campaign that he would depart from the common practice of appointing such people, but that has not yet been the case.

The regulatory measures in place to register the foreign interests that lurk behind establishment figures and the institutions they serve are wholly inadequate. The special counsel investigation into possible foreign interference in the 2016 presidential election has been a case study on the subject.

Special counsel Robert Mueller has already scored indictments of several individuals in the Trump orbit who were apparently willing to risk punishment for a substantial payday in fronting for foreign interests. And why not? The penalty for violating the Foreign Agents Registration Act is a fine that typically represents only a fraction of what they were actually paid by the foreign client, and the maximum five-year prison sentence might be deemed worth the risk, since the Justice Department pursued only seven FARA cases from 1966 to 2015, according to a 2016 Department of Justice inspector general's report.

It has been widely reported that at least one of the sit-downs at Trump Tower in the summer of 2016 was a meeting between members of the Trump campaign and agents of the United Arab Emirates, Saudi Arabia and Israel. Even if it's unclear what that meeting was about, it gives the American public cause for concern about the optics and potential meddling. Any incentive for pursuing such meetings needs to be quashed, if only because they call into question foreign policy decisions made by the administration.

Of course, there is a flip side: Other countries might then adopt the same anti-interventionist measures to keep American money out of their own elections and domestic affairs. If there's one issue that Pence and Cheney didn't dispute in their debate, it's America's implicit right to meddle.