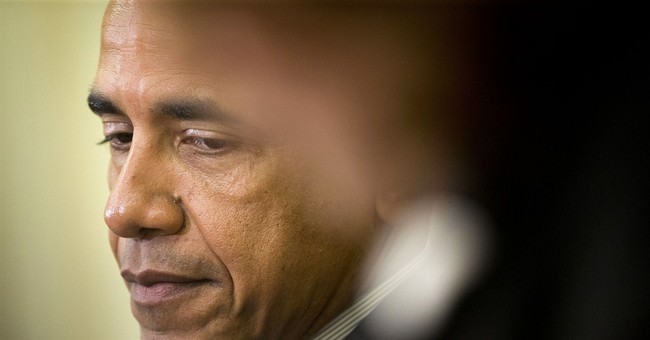 Trending
PARIS -- U.S. President Barack Obama recently cautioned U.S. Coast Guard Academy graduates in a commencement speech: "I'm here today to say that climate change constitutes a serious threat to global security, an immediate risk to our national security. And, make no mistake, it will impact how our military defends our country."

Whenever someone utters the words "make no mistake," it usually serves to flag some nonsense in the immediate vicinity. In this case, that little phrase is working overtime.

It's true that some of the warmest places on the planet are regions with significant security threats -- but that has always been the case. Correlation isn't causation. Conflict zones aren't simply that way because it's hot there, or because the land is less arable. If that were the case, the U.S. military would just airdrop some air conditioners or Big Macs and call it a day.

The only goal of climate change initiatives is eternal perpetuation of the notion of climate change. Obama's linking of climate change to national security interests is a Hail Mary attempt to extend the scam's lifespan after it was already rebranded from "global warming" -- apparently to help explain any perceived cooling en route to our hypothetical planetary inferno.

The endless debate over whether climate change is real is like arguing whether the Kardashians have talent. It's irrelevant at this point. The issue is now largely faith-based. Rather than try to convert the true believers, let's just maneuver around them and focus instead on solving the real issues typically attributed (falsely or not) to climate change.
CARTOONS | AF Branco
View Cartoon

If we're talking about human comfort and livelihood, then addressing climate change is not the same thing as trying to control the earth's temperature. Human adaptation is readily doable. Controlling the entire planet's climate clearly is not -- even if you're a narcissist of epic proportions who refuses to believe otherwise.

So let's unpack the various problems that Obama attempted to conflate in his speech and come up with a measurable, pragmatic solution for each:

National security: Invest in America's own national infrastructure and economic health to maximize resilience against any security or environmental elements.

Defense capabilities: Innovate to improve operational capacity across various types of weather conditions. As an added bonus, some pretty cool defense innovations have been adapted to civilian use over the years, including the Internet, duct tape and digital photography. Let's aim for more of those.

Reducing the climate change agenda to pragmatic terms might start paving the way toward some measurable results. Imagine if, 23 years ago, at the inaugural United Nations Framework Convention on Climate Change, the declared goal had been to ensure that citizens of target countries had access to air conditioning -- and if every year thereafter, access could be measured. Either everyone would have air conditioning by now, and climate change would be moot, or it would have proven to be a failed initiative. Instead, our leaders are now reduced to scaring up support for climate change initiatives.

Obama isn't the only one who sounds ridiculous. French Minister of Foreign Affairs Laurent Fabius is trying to drum up support in advance of the United Nations Climate Change Conference in Paris later this year over which he will preside. Earlier this month, when evoking the pledge by wealthier countries to give up to $100 billion per year to poorer countries to help them deal with climate change, Fabius said that "when we add up these contributions, it's possible that we will effectively be above 2 degrees Celsius, maybe in the vicinity of 3 degrees Celsius."

Well, that's no good. Everyone, please be sure to put as much as you can into the collection plate of the Church of Climate Change so that politicians might continue to justify sucking up your tax dollars to perpetuate the illusion of value. Bank robbers are more honest.

Here's the definitive catch-all climate change solution: Approach the leaders of the countries that are supposedly struggling with climate change issues. Offer to come in with various multinationals to conquer the environment and resulting problems, under the condition that no one is allowed to start whining about "foreign intervention." The multinationals will invest in stability and engagement programs in and around their assets to protect their interests -- with the local population benefiting. These companies have boards and shareholders to which they're accountable, which tends to beat governmental non-accountability in terms of results. Let any investments on oversight be applied that way rather than to the ridiculous accounting of abstractions like carbon footprints.

Let's not spend another 21 years pretending that governments are doing anything useful to remedy so-called climate change or those they claim to be affected by it.
A Female U.S. Soldier Has Been Assaulted by Afghan Refugees in New Mexico
Katie Pavlich
What Pro-Abortion Dems Did Besides Passing So-Called Women's Health Protection Act Adds Insult to Injury
Rebecca Downs
Lindsey Boylan to Chris Cuomo About His Sexual Harassment Scandal: 'Will You Hold Yourself Accountable?'
Landon Mion
Members of Congress Introduce Legislation to Protect Americans from Biden's Vaccine Mandates
Rebecca Downs
Liberal Media Outlets Upset Over Gabby Petito Coverage Fail to Realize This