The Boy Crisis, The Dad Solution

Rachel Alexander
|
Posted: Jun 17, 2018 12:01 AM
Share   Tweet
The opinions expressed by columnists are their own and do not necessarily represent the views of Townhall.com. 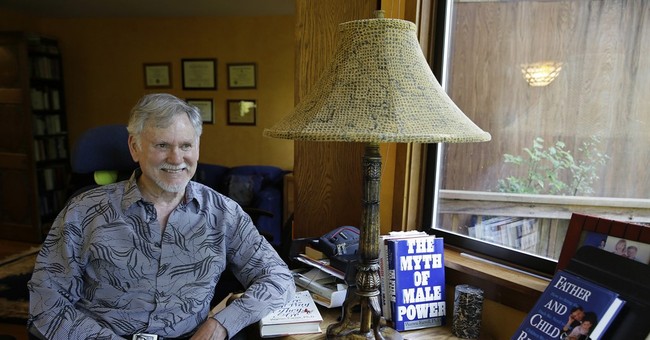 For Father’s Day, I interviewed Dr. Warren Farrell, co-author (with John Gray of Mars/Venus fame) of the just-published “The Boy Crisis.” While Dr. Farrell identifies ten causes of the boy crisis, he found that by far the biggest cause is a lack of father involvement.  He explains why children who have minimal or no father involvement (who are “dad deprived”) suffer in more than 70 different areas in comparison to children who are “dad-enriched.”

Farrell says the boy crisis is global. Among the 60 largest developed nations, boys are falling behind girls in every academic area, as well as in social skills, career preparation, mental health and physical health. He found that in developed nations, with fewer survival concerns, there was less stigma for women to have children without being married. In the U.S., for example, 53 percent of women under 30 who have children are not married. Among these women, dad-deprived children are the norm. Dad-deprived girls suffer considerably, but the boys (with no role model) suffer even more.

Developed nations also give more permission for divorce. And among those children of divorced parents who see little of their dad, once again the girls suffer in most of the 70 areas, and the boys suffer even more intensely. As Farrell puts it, “the boy crisis resides where fathers do not reside.”

Among the 70 deprivations Farrell documents is that dad-deprivation is the greatest predictor of a boy becoming addicted to drugs or committing suicide. Dad-deprived boys are much more likely to drink excessively, be bullies, drop out of school, be alienated and rudderless. The result? Our prisons are centers for dad-deprived boys and men. In contrast, boys who are dad-enriched do better in school even when they come from poorer areas; they have less ADHD and, surprisingly, more empathy.

Obviously, dad-deprived boys hurt. Less obviously, boys who hurt, hurt us. Since 1948, 26 out of 28 of the deadliest mass shootings (between 8 and 58 killed) were marked by dad-deprivation. And, of course, dad-deprivation plagued Nikolas Cruz of the Parkland shooting. As it did Adam Lanza (Sandy Hook), Elliott Rodgers (UC Santa Barbara) and Dylan Roof (Charleston Church).

Dad-deprivation doesn’t just hurt us via mass shootings. ISIS recruits are almost all dad-deprived — not only the boys, but also the girls. Besides the world’s psychological insecurity created by ISIS, the U.S. alone spends trillions of dollars paying for resources that are only a fraction as effective as the underutilized resource of dads.

Exactly what do dads do that leads to children benefitting so much? Dad-style parenting differs from mom-style in about ten different ways. One of the differences is a dad’s tendency to enforce boundaries. Farrell says children often feel insecure when a boundary is unenforced — picture a child in a black, dark room, not knowing where the walls are. Dads use methods such as roughhousing to make boundary enforcement work without rebellion.

Roughhousing teaches a child the difference between assertive and aggressive behavior — how to treat siblings gently even when they are excited and wanting to “beat” dad at wrestling. This “emotional intelligence under fire” allows the child to make better social contacts, which inhibits depression. And it also allows the father to bond with the children. This gives the father the ability to enforce boundaries without having the child become resentful or rebellious, because the child feels the father is a lot of fun and also knows the father is like a roller coaster — providing fun with safety.

A dad typically blends these by setting a boundary (“bedtime at nine”) and promising, “between the time you get your homework and chores done and bedtime, we can have more fun or your favorite bedtime story.” This gives the kids the incentive to do a laser focus on their homework and chores. That is, they learn postponed gratification — to focus on what they need to do to get what they want to do.

Farrell has found that postponed gratification is the single biggest predictor of a child’s success and the best way to prevent ADHD. Not having the discipline to focus leads to becoming distracted rather than finishing homework, and leads to not being able to focus on the practice needed to stand out in sports. Children raised predominantly by dads are 15 percent likely to have ADHD. Whereas children raised by moms are 30 percent likely to have ADHD. (This is despite the fact that dads get the more challenging children to deal with.)

Aside from father involvement, schools can be instrumental. Four examples are, first, communication and empathy training should be a core curriculum in school. Second, hiring more male teachers so children don’t go from a mother-only home to a female-dominated elementary school. That kind of environment can lead to boys joining gangs because they are in search of male role models.

Third, rejuvenate vocational education in schools. In Japan, 25 percent of the children are on a vocational education track and almost all graduate. Ninety-nine percent of their graduates are employed. In contrast, in the U.S., a very high percentage of boys drop out before high school, and the unemployment rate among boys in their 20s who drop out of high school is 20 percent. When they’re unemployed, they’re more likely to do drugs and end up in prison. The cost of prison could easily be reduced by turning these boys into taxpayers.

Fourth, restore recess. Recess produces more brain power than studying. It connects more synapses and neurons in the brain. Boys especially need that physical activity time before they can settle into learning.

Finally, Farrell says father involvement is an underutilized free resource to combat the opiate crisis among both fatherless children and fathers without purpose who are feeling unneeded and not valued. So many dads are isolated from the love they could be giving to and receiving from their children. Father involvement with their children is a great win-win, a missed opportunity in society.